A unicorn. A Blues Stanley Cup. An end to the violence in Ferguson. To finally start school. Peace.

These were the wishes children made at the Florissant Valley branch of the St. Louis County Library as they waited for the violence in Ferguson to calm down long enough for them to walk safely to school.

"Wish wands" decorated with pipe cleaners, construction paper and different-colored feathers offered a window into the thoughts of north-county elementary school kids during the three-day event last week. For some children, the violence, looting, protesting and shooting of Michael Brown was at the top of their minds. For others, Brown's death wasn't as concerning as the macaroni and cheese and pineapples they ate for lunch.

Today is the first day of school for the Ferguson-Florissant School District, where classes were pushed back a week in the wake of violence and protests over Michael Brown's death. While students were waiting for school to start, they got a little relief from summer boredom with a spur-of-the-moment event called "Create @ Your Library," organized by the library and the Magic House.

Playful chatter, screams of delight and guitar chords escaped from the basement auditorium of the Florissant Valley Library late Friday morning into the afternoon. A gaggle of elementary-age kids huddled around tables filled with various art, math and science activities. The most popular table had a huge tub of Legos, and a few kids gathered around Katie Norvell, a certified music therapist. 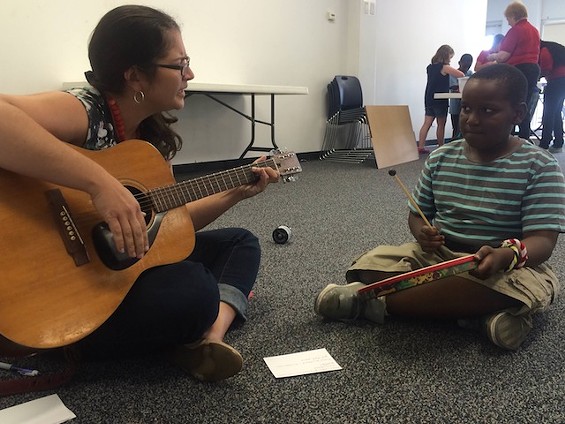 "Music can be so motivating and reinforcing," Norvell said. "The idea behind music therapy is to help people realize music and non-music goals though rhythm and melody."

Tacory Kent, a third grader at Central Elementary School in Ferguson, played the tambourine while Norvell strummed her acoustic guitar. The two went through several versions of a song Tacory was working on before he was satisfied.

Laura Kasak, the branch manager who helped organize the event, told Daily RFT the librarians began planning the event late Monday evening, and by Tuesday morning, 40 kids showed up. The librarians wanted to do something to "provide kids with a peaceful respite" from the situation in Ferguson, she said, rather than try and explain or talk about it.

Diane Kent, the mother of one and grandmother of three of the children at the library Friday afternoon, expressed concern over the situation and is worried about the questions that remain unanswered.

"There is so much we don't know," she commented. "The only people who know what happened are the people who were there, so how can anyone else judge?"

Kent said she was mad when she first heard the unarmed Brown was shot by a police officer. But she can also see the situation from officer Darren Wilson's perspective. He was alone, and he might not have known Brown was unarmed. But, she added, he could have shot him in the leg.

"Do you think it's almost over?" she asked of the protests on West Florissant Avenue. "I hope all the violence and looting is over."

Kent drove her son and grandchildren down West Florissant during the day to see protesters, saying it's important that they know what's going on. She explained to the four kids why people were marching up and down the street carrying signs and chanting.

Her son, Tacory, thought it was wrong for the officer to shoot Brown. "He should be in jail, and I think everybody should be peaceful," he said.