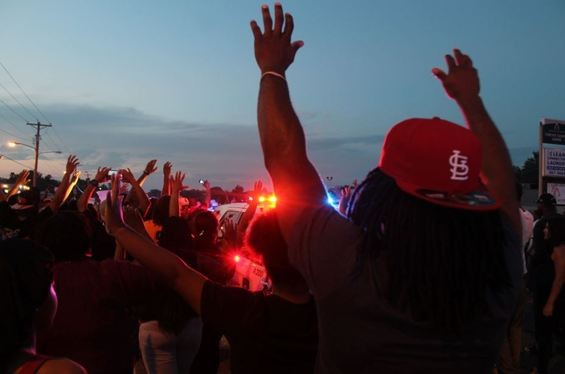 At the heart of discussions over the racial divide in Ferguson is the high number of tickets and warrants issued to the city's black residents. To help alleviate some of that tension, four St. Louis attorneys are asking Ferguson mayor James Knowles to grant amnesty to the thousands of nonviolent bench warrants currently on the city's court docket.

In a letter to Mayor Knowles, Saint Louis University law professors John Ammann, Stephen Hanlon, Brendan Roedinger, as well as ArchCity Defenders' Thomas Harvey ask that the fines and warrants be forgiven as a way to create a "fresh start" toward community reconciliation.

"The City of Ferguson has more warrants than residents," the letter states. "Most of these warrants are from unpaid fines for nonviolent offenses. For many young people, these warrants act as a barrier to employment and housing. Just as importantly, the psychological trauma of spending each day subject to arrest and incarceration is debilitating."

The letter goes on to urge Knowles to take the following actions:

- Remit all outstanding fines from non-violent offenses in their entirety and cancel any warrants associated with those offenses.

- Pardon all pending unassessed cases alleging non-violent offenses and recall any warrants associated with those cases.

"We think this will have a symbolic effect, as well as a practical effect," Ammann, a long-time professor at SLU, tells Daily RFT. "Symbolically, it's an act of reconciliation with the minority community. And practically, it will help those with outstanding warrants be a part of the community."

As an example, Ammann points out that city officials claim they want to recruit more black people to be on the police force. But with the large number of warrants -- more than 40,000 in Ferguson, a city with a population of about 21,000 -- many are excluded from the start.

In addition, having warrants can prohibit a person from getting accepted into job-training programs. Harvey explains that the risk of getting arrested in the middle of a program makes many training providers reluctant to invest in that student.

"If you have warrants, you can be arrested at any time, and the training is wasted," he says.

The municipal court system is a common grievance among Ferguson protesters. Many told Daily RFT over the past two weeks that they felt harassed and targeted by police who issue fines, which then turn intro warrants -- and possible jail time -- if they go unpaid.

See also: Police Ease Up On Ferguson Protesters, But Reasons for Protest Not Forgotten

Below is a graphic showing the cities with the highest warrant-to-ratio population:

Back in April Riverfront Times pointed out the disparity among municipal fines in cities with different race and economic demographics.

Pine Lawn is 96 percent black, and its per capita income a measly $13,000. In 2013 the city collected more than $1.7 million in fines and court fees. That same year, the affluent west-county suburb of Chesterfield, with a population of 47,000 (about fifteen times bigger than Pine Lawn) and a per capita income of $50,000, collected just $1.2 million from municipal fines, according to statistics compiled by the state.

Several other north-county municipalities with high populations of African Americans also have similarly high warrant-to-population ratios as Pine Lawn. Country Club Hills, with a population of only 1,274, issued 2,000 municipal warrants last year and has more than 33,000 outstanding. Over 90 percent of Country Club Hills' residents are black and they have a per capita income of under $14,000. The same is true in nearby Wellston, a city that's 97 percent black and has a per capita income of less than $12,000. Last year its municipal court issued more warrants than the city has residents -- 3,883 new warrants compared with a population of 2,300.

In light of recent events in Ferguson, the issue is now getting national attention.

"A lot of our clients believe that the courts are just about money, not about public safety," says Harvey, whose nonprofit group ArchCity Defenders represents clients deeply impacted by municipal fines and warrants. The group recently put out a white paper exploring the problems associated with municipal court fines.

He continues: "One of the advantages of amnesty is it's a good first step towards healing things with the community. These warrants wreak havoc on people's lives, they're not about public safety, and our clients believe there's a motivation to give tickets is based on race and poverty."

"It's a long-term project," says Ammann. "We'll start with Ferguson and continue onto other municipalities."