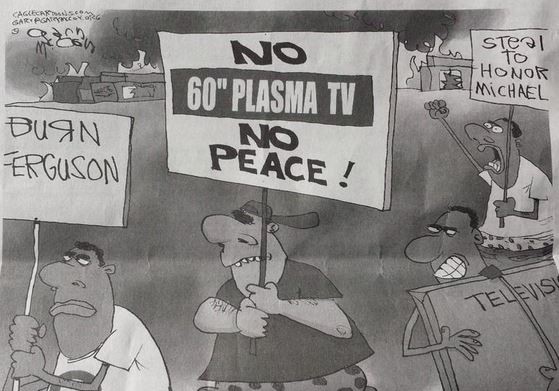 Opinion pages are supposed to be provocative, but Jim Robertson, managing editor at the Columbia Daily Tribune, admits Wednesday's editorial cartoon may have gone a little overboard.

Twitter erupted in fury after the Tribune ran a syndicated Gary McCoy cartoon based on the looting and riots that gripped Ferguson after the shooting death of eighteen-year-old Michael Brown. In the cartoon, Ferguson burns in the background as three black protesters hold picket signs advocating looting, and one black man steals a television set.

"I understand for many people, there is a very thin line between provocative and disturbing and racist," Robertson tells Daily RFT. "Maybe we were a little tone deaf on that. And maybe that's an understatement."

The cartoon accompanies a column from Rich Lowry, editor of National Review, who criticizes the "completely unjustifiable lawlessness" of the looters in Ferguson, who burned down a QuikTrip and stole from Feel Beauty Supply, Sam's Meat Market, Ferguson Market and Liquor and other stores on West Florissant Avenue.

But by the time McCoy's cartoon ran, protesters hadn't looted a store in Ferguson for four nights, and Ferguson had finally experienced its first night of relative peace in a week.

Robertson isn't the one who chose the cartoon, but he gave final approval for it to run in Wednesday's paper. He's surprised at the influx of overwhelmingly negative reaction, though 98 percent of it comes through Twitter, he says, not from regular readers in this college town two hours west of St. Louis.

"In the context of their hometown paper, I think [local readers] know better than that we would run a racist cartoon," Robertson says. "We get complaints from both liberals and conservatives that we're either liberal or conservative, but I don't think anyone thinks we're just mean racists. That has never been our style, and it won't be."

Robertson says he probably would have pulled the cartoon if he had anticipated the uproar it would cause.

"Even though I don't necessarily agree that it had no value, it's not worth the trouble it has caused," he says. "There is no journalistic principle involved here. You'd rather not piss people off."

And, oh, did it ever piss people off:

@columbiatribune That cartoon is racist and despicable - you should apologize immediately.

Dear @columbiatribune how do I explain the racist cartoon in your paper to my child?

In light of the racist cartoon via @cohenss that was in @columbiatribune, maybe advertisers should pull their advertising dollars? #Ferguson

@columbiatribune Your cartoon is extremely racist. I wouldn't expect you to understand our protest because officers don't kill your children