QuikTrip CEO: "What Happened in Ferguson Could Happen Anywhere" 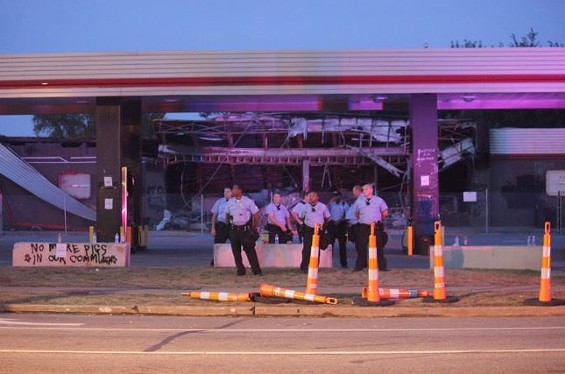 The QuikTrip at West Florissant Avenue and Northwinds Estates Drive has become ground zero, as the press corps here likes to say, for the unrest that grips Ferguson.

By day, it has served as a lively gathering place, a shelter from the rain and an icon of reclamation on a street that draws peaceful demonstrators against police brutality from all over the world. By night, its burnt-out husk is a shrine to chaos, a reminder of what happens when the tensions bubbling in this St. Louis suburb boil over.

The gas-station chain still isn't sure whether it will rebuild the destroyed store or reopen another store that's been closed as a safety precaution two miles up West Florissant Avenue. But so far CEO Chet Cadieux has been admirably upbeat about the community that has turned his brand into a symbol of protest.

"Ferguson is a good, affluent area," Cadieux said Tuesday, according to Tulsa World.

"It's just that you get to a point that there's a deep sense of social outrage, and what happened in Ferguson could happen anywhere." 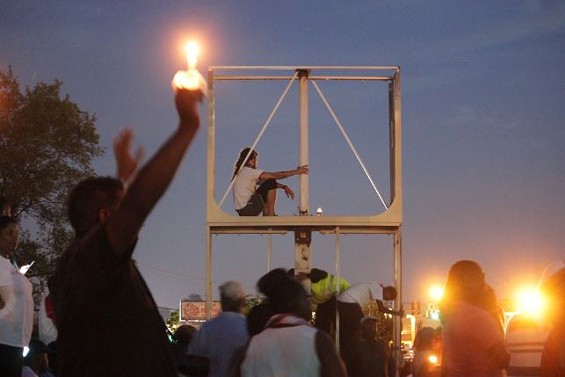 Cadieux, who is notoriously difficult to reach for media interviews, commented on his Ferguson stores Tuesday during the International Council of Shopping Centers' Oklahoma Idea Exchange in Oklahoma City. He said the store at 9420 West Florissant Avenue hasn't seen any unrest since it was built in 1989.

"The people who are causing trouble aren't even from Ferguson," he said, according to Tulsa World. "They're opportunistic people coming into the area for looting."

Sunday night, a little more than 24 hours after Ferguson police officer Darren Wilson shot and killed unarmed teen Michael Brown nearby, rumors began to spread about the QuikTrip near the apartment complex where Brown lived. Protesters heard that Brown was shot because QuikTrip called 911 on him for robbing it, according to the Washington Post.

The rumors were only sort of true: Ferguson police say Brown did rob the nearby Ferguson Market and Liquor before he was killed.

But the damage was already done. Looters smashed into the QuikTrip, stealing food and alcohol before setting it ablaze.

As of Tuesday, a chainlink fence keeps protestors and violent instigators off store property, and workers had emptied the underground fuel tanks. QuikTrip has declined to share how much revenue it is losing by closing two gas stations or to speculate about its return to the neighborhood.

"At some point, we hope everything calms down and we'll be able to take care of our customers," Mike Thornbrugh, a spokesman for QuikTrip, told the St. Louis Post-Dispatch. "Right now, we just can't do that."