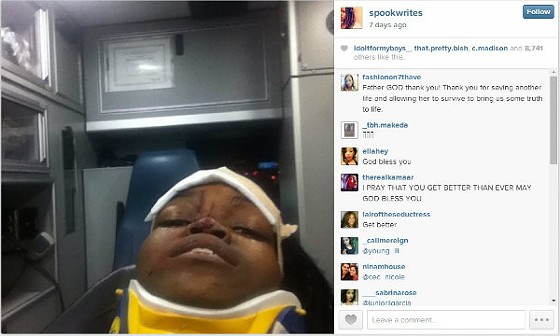 Here's what Mya Aaten-White remembers from the night of August 12: It was about 11 p.m. She was walking back to her car on Highmont Drive near the burned-out QuikTrip after attending a Mike Brown rally in Ferguson. There were a few people in front of her. Suddenly, shots rang out. Everyone dropped to the ground and covered their heads. When she sat up, Aaten-White knew something was wrong.

"Oh my God, you're shot in the head," she recalls a young man telling her.

Several young men carried her into a nearby house where the residents called 911. She says police officers -- she believes they were St. Louis County police -- interviewed her briefly before she was taken to the hospital. She was able to take the above photo in the ambulance and upload it to Instagram. It went viral.

Now, a little over a week later, Aaten-White wants to know why no one in law enforcement has followed up with her about her case. Stranger still, she says, she doesn't know what happened to the bullet that doctors removed from her skull.

Read all of our coverage about Michael Brown and Ferguson here. A video that seems to show police reacting to Aaten-White's shooting:

Aaten-White is a St. Louis native who lives in Florissant. She says she's the great-granddaughter of local jazz legend Mae Wheeler and works at a law firm. She says she went out that Tuesday night in support of Michael Brown's family.

The bullet lodged against her skull, near the middle of her forehead. Aaten-White says it took doctors about a day to decide that it was safe to remove it. She says when she woke up from the surgery on Wednesday evening, August 13, the doctors and nurses told her police officers came and confiscated the bullet as evidence. As she recovered, she says, she waited for those officers to return and do a full interview about the incident.

"I would ask every day while I was there," she says, "'Did anyone from the police department come? Have they called for me? Are they going to be here today?' And nobody could give me an answer."

Media reports have characterized Aaten-White's shooting as a "drive-by." From Post-Dispatch reporting:

It appeared to be a drive-by shooting. Police said they were looking for four or five men. The woman was shot once and is expected to survive. It was unknown if the shooting was related to the protests in the area.

Aaten-White says she didn't see a car or a weapon, and the only "four or five" young black men she observed were the ones who brought her to safety.

"Those words never came out of my mouth. I didn't know what people were talking about. I never said it was a drive-by," she says. "Those young men carried me and saved my life."

Aaten-White is home now, recuperating, though she did appear at a church rally with Michael Brown's family. She also retained Marwan Porter, a Florida-based attorney who specializes in cases involving police misconduct and personal injury. He's in town now, and Daily RFT spoke with him yesterday as he drove to the Ferguson Police Department to try to obtain Aaten-White's case files.

"We want to find out who and what agency took possession of the bullet," he said. "We want to identify who was responsible for firing the weapon that ended up with a bullet being lodged in the front of Mya's head."

When we spoke with him several hours later, the story just got weirder.

"I've talked to both the St. Louis County Police Department and Ferguson...they have no record...no file number, no report," he said. "They don't have anything."

"It almost seems like, if, you know, if I did not follow up with this, they were hoping it would disappear," says Porter. "I don't know what the reasons are."

Porter did not yet want to give Daily RFT the name of the hospital where Aaten-White was treated, but he says he's going back there to request records to see who was admitted to retrieve the bullet.

Meanwhile, Aaten-White says she has no interest in either Ferguson or St. Louis County handling her case from now on. Porter says he'd like to see federal investigators from the U.S. Department of Justice take over.

"I want the situation to be investigated fully, and I want to find out who shot me," says Aaten-White.

Obviously this is (yet another) developing situation, and we'll update as we learn more.