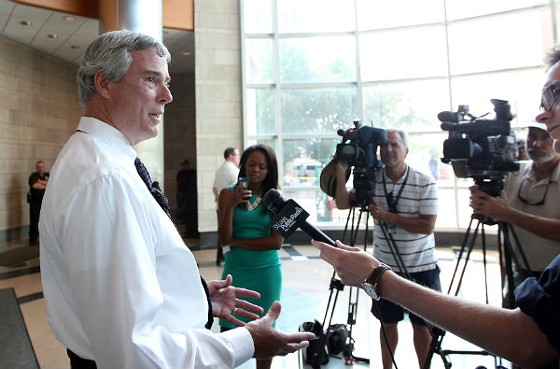 According to a spokesman for St. Louis County Prosecutor Bob McCulloch, a grand jury will begin hearing evidence in the Michael Brown shooting today -- though he gave one caveat.

"[We are] attempting to present evidence," said Edward Magee yesterday. "It depends on the availability and actual appearance of the witnesses."

Read all of our coverage on Ferguson and Michael Brown at this link.

The location of the grand-jury proceedings is secret, as are the names of the members, so the public will not be able to attend. Magee says these members were chosen by a judge and have been on the job for about two months.

Magee says that there is no timeline for the grand jury. He says the plan is to begin tomorrow, which again is contingent on witnesses appearing.

"We won't know until people show up," he said. "Then once the grand jury starts, we will make no further comments about the proceedings."

Magee told Daily RFT in an email that the St. Louis County Police Department conducted an interview with Ferguson police officer Darren Wilson, the shooter, though late last night he wasn't sure the prosecutor's office had it quite yet. He wrote that the county officers dropped off multiple interviews yesterday. He added that they do not have the FBI interviews either, "but will receive them at some point." He also said they still do not have the ballistics report and the investigation is ongoing.

After the grand jury has heard all the evidence, they will determine whether Wilson will be charged. If he is charged, it will be up to McCulloch to move forward with the case or dismiss it.

Grand jury hearings can take as little as ten minutes or as long as weeks, according to a former St. Louis county prosecutor who spoke to Riverfront Times on background today. Our source suspects the case against Darren Wilson to take at least a day or longer considering its sensitivity.

"Grand juries tend to indict more man 99 percent of the time," says the former prosecutor. "That's where you get the saying that a grand jury would indict a ham sandwich. Unlike a trial jury, they only have to determine probable cause and not guilt beyond a reasonable doubt."

Still, our source says that Wilson's indictment is far from guaranteed. He notes that in 2000 a St. Louis county grand jury failed to indict two white undercover officers who shot and killed two unarmed black men in a case that carried much of the same public outcry as the shooting of Michael Brown.

"From the outset, I have been clear about the need to have a vigorous prosecution of this case, and that includes minimizing any potential legal uncertainty. I am not asking St. Louis County Prosecutor Bob McCulloch to recuse himself from this case. There is a well-established process by which a prosecutor can recuse themselves from a pending investigation, and a special prosecutor be appointed. Departing from this established process could unnecessarily inject legal uncertainty into this matter and potentially jeopardize the prosecution."

And here is Koster's statement:

Here's your remarks from Mo. Attorney General Chris Koster, who came out to speak to demonstrators earlier. pic.twitter.com/XOepuuurIe