Ferguson Residents Try to Make Do Living in a War Zone of Tear Gas, Explosions 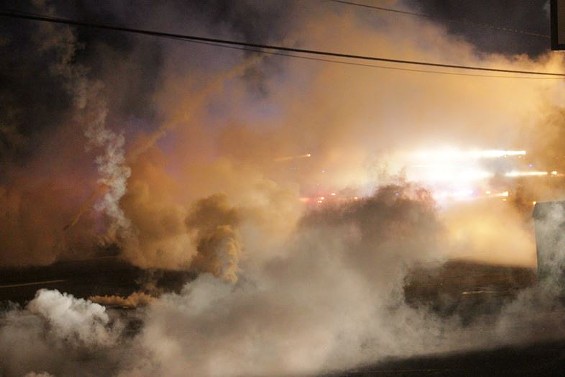 Brittany Townsend sat on her front stoop Sunday around 10 p.m. with a weary look on her face. An hour earlier police on nearby West Florissant Avenue began shooting tear gas at protesters in an attempt to disperse the crowd. Now the noxious fumes had drifted into her yard as they have nearly each night since demonstrators in Ferguson began protesting the police shooting of eighteen-year-old Michael Brown.

"It's not been easy living here," said Townsend, who's home on Lang Drive back up to the Public Storage on West Florissant. "I have a two-year-old daughter, and to throw tear gas down a residential street in front of my house, in the back of my house, past my house is not right."

Townsend's complaint is echoed by other nearby residents whose lives and comfort have been upended by the nightly sting of tear gas in the air and chaos occurring just a block or two away.

Read all Riverfront Times coverage of Michael Brown and Ferguson.

As an armored police vehicle pulled down Lang Drive last Sunday, Townsend got up from her porch and hastily retreated inside. The police truck slowly passed by shooting smoke bombs and wooden plugs at protesters who'd scattered into Townsend's neighborhood.

But even inside her home, Townsend cannot fully escape the tear gas. It seeps under door and through cracks in the home she's lived in for fourteen years. On Sunday Townsend said her nose bled for three hours. Her daughter is too young to understand what's going on, but she cries throughout the sirens, flash bangs, and screaming protesters. Townsend added that many residents in the area are elderly and have been experiencing health problems as a result of the penetrating fumes.

"We can't keep my dog outside now because we're afraid she's going to get tear gassed or people are going to run through the backyard and trample her," Townsend said.

Donald Harry lives across West Florissant on Nesbit Drive near the burned QuikTrip.

"It's noisy," he says of the nightly protests. "Noisy and chaotic whenever police start deploying tear gas. People get to running in all different directions, and you can't really see anything. All you hear is explosions going off." But the noise doesn't keep him awake, he says, because he's usually up during the protests. 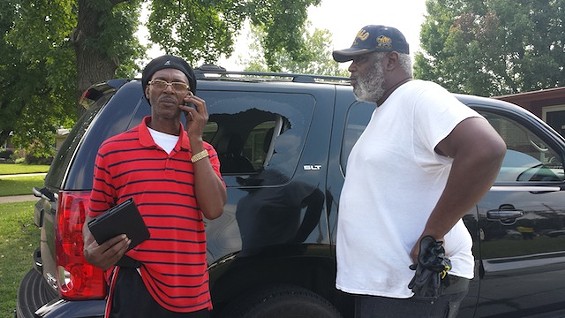 Although he says he doesn't feel the effects of the tear gas while he's inside, one of his truck windows was shot out a few nights ago along with some other minor damage.

"But for the most part, people have been really respectful of my property," he says of protesters. "We'll just see what tonight has to bring."

Bernice Deardueff, 86, lives a little farther north on the other side of West Florissant. The fence around her back yard ends a few feet from the curb.

She said she's nervous about the recent protests, but she'll never move. Deardeuff is proud of her neighborhood and eager to talk about it. She spoke of the tight knit community she feels among the 25 houses in her subdivision that lives in racial harmony. Dearduff said black and white families have each other over for dinner all the time.

"We've never seen anything like this around here," she said. "But my son and another man get up early every morning and pick up trash on the streets. I think we've got the best dressed section."

Derrick Thomas, 44, whose mother lives in the same subdivision as Deardeuff, said the same things of the relationship among residents.

"It ain't us," he said referring to the people destroying property and looting. "This neighborhood is quiet. We never had no problems, never had no trouble. You got people from different neighborhoods coming in and tearing stuff up."

Thomas said he won't move away either.