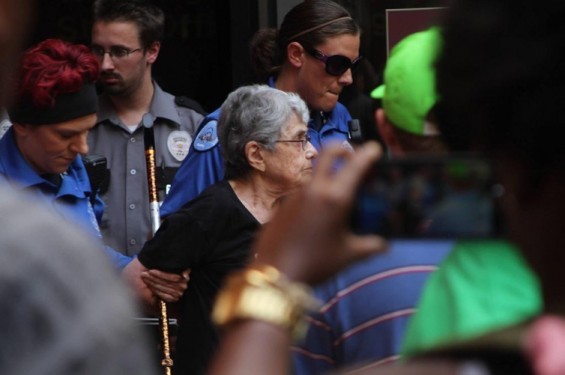 Hedy Epstein knows a thing or two about human rights. As a Holocaust survivor, German-born Epstein has seen her share of abuse and oppression. After all, the Nazis didn't care much for the civil liberties of Jews or for anyone who wasn't of the Aryan race.

Epstein's experience is why she eventually immigrated to the United States, where she has been an outspoken activist for affordable housing, anti-war and pro-choice issues. The St. Louis resident, who was born in 1924, even founded the local chapter of Women in Black, a group that began as a response to Israel's occupation and has broadened to become anti-war in general.

With that kind of résumé, it's no surprise that Epstein wanted to voice her opinion about Michael Brown's death and the handling of the investigation. But what's surprising to many is that Epstein would be taken into custody while doing so.

Epstein was part of a crowd of about 100 people who gathered in downtown St. Louis on Monday, August 18. The group's plan was to march down Market Street near Kiener Plaza and turn toward the Wainwright Building on North Seventh Street, where Missouri Governor Jay Nixon has an office:

March is about to begin. Chanting "hey hey ho go! National guard has got to go." #Ferguson pic.twitter.com/xLHs73Swuz

At the governors office! Hands up don't shoot! pic.twitter.com/qiYBj85XRc

Bike patrols figuring out what to do. Crowd against door. "We demand to get in." pic.twitter.com/ZJc8ZHvYTc

Protesters tried to enter the building, ostensibly to meet with Nixon:

But then the group turned the protest into a sit-in:

Eventually, some protesters spoke on a bullhorn and led the group in chanting "Hey, hey, ho, ho, the National Guard has got to go," and "Whose building? Our building," among other things:

"Whose building? Our building," chants crowd at civil disobedience rally outside state bldg in downtown St. Louis. "This is 1962" says one.

I'm pregnant and I don't want to think of raising a black man! The only race is human we have to stand together! pic.twitter.com/cFcdsTqbek

The police and security officers again denied protesters entry to the Wainwright Building:

Protesters aren't being let in, security told me they're not here on "official business" - #Ferguson pic.twitter.com/6CleokqMnA

And that's when the St. Louis Business Journal reports that police arrested eight protesters -- including Epstein, who was wearing a shirt that said "Stay Human" -- for blocking the Wainwright Building's entrance:

@RiverfrontTimes Holocaust survivor gets obtained while trying to move forward to the state office building pic.twitter.com/vwNN5TnVDf