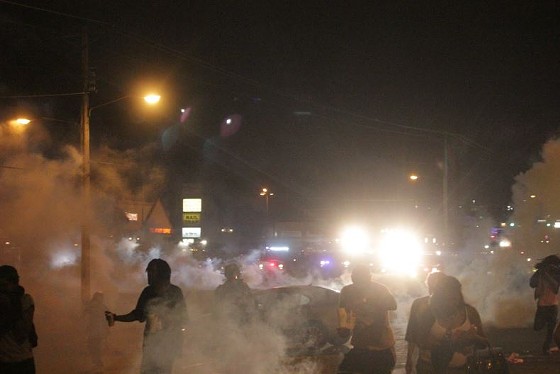 Update 1 p.m.: There will be no curfew tonight, according to a statement released this afternoon from the governor's office. The National Guard will be on the scene. See below for more details. End of update.

"Tonight, a day of hope, prayers and peaceful protests was marred by the violent criminal acts of an organized and growing number of individuals, many from outside the community and state, whose actions are putting the residents and businesses of Ferguson at risk," said the governor in a statement that accompanied his executive order.

Reports of shots fired around 8:30 p.m. last night derailed what had been a massive -- yet peaceful -- demonstration along West Florissant Avenue. Police later reported multiple gunshot victims shot by civilians (not police) and molotov-cocktail attacks on officers.

"Given these deliberate, coordinated and intensifying violent attacks on lives and property in Ferguson, I am directing the highly capable men and women of the Missouri National Guard to assist...in restoring peace and order to this community," Nixon said. 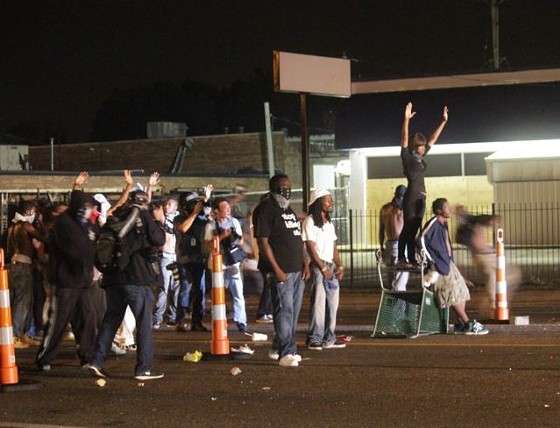 Nixon's order came as a surprise. During a press conference held less than hour before the governor's announcement, Missouri Highway Patrol Captain Ron Johnson told reporters the new security measures under consideration did not include National Guard troops.

Johnson has been widely praised for his handling of the complicated enforcement challenges present in Ferguson. Since the shooting death of eighteen-year-old Michael Brown on August 9, violence and looting have marred several of the nightly demonstrations held along the town's main drag, West Florissant Avenue.

"Tonight, a Sunday that started with prayers and messages of unity, peace and justice, took a very different turn after dark," Johnson told reporters just after 1 a.m. Monday morning.

"The catalyst was not civil disobedience, but preplanned agitation and aggression. Coordinated, in many cases." 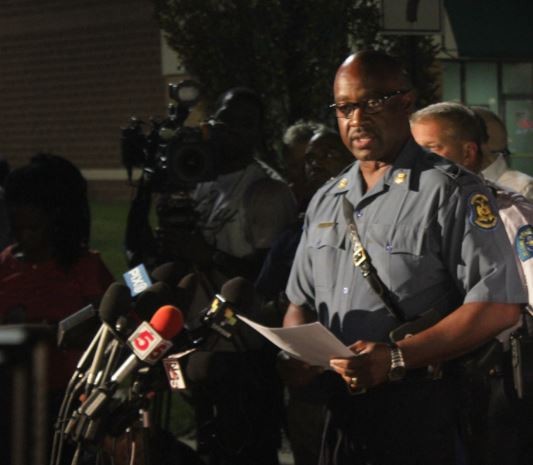 Johnson laid out the following timeline of Sunday's escalating violence:

8:25 p.m.: A civilian was reported shot on West Florissant and Ferguson avenues. When officers responded to reach the victim, Johnson said they were met with gunfire and molotov cocktails. Around the same time, vandalism and looting was reported at Domino's Pizza, O'Reilly Auto Parts, Family Dollar and a public-storage company -- all located on West Florissant Avenue. 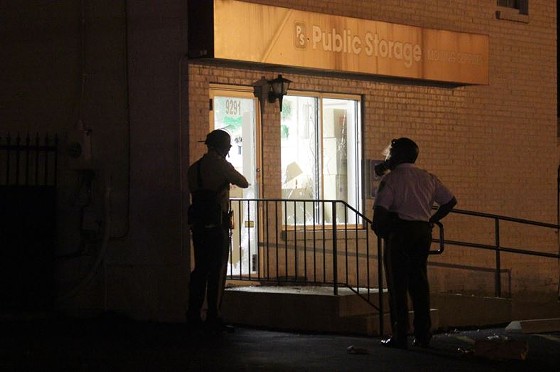 8:26: Police received a report of shots fired at north of Canfield Drive.

8:27: Police received a report that a subject was down, felled by gunfire.

8:28: Police received a report of eight people with guns in the same area. Tactical teams were deployed. 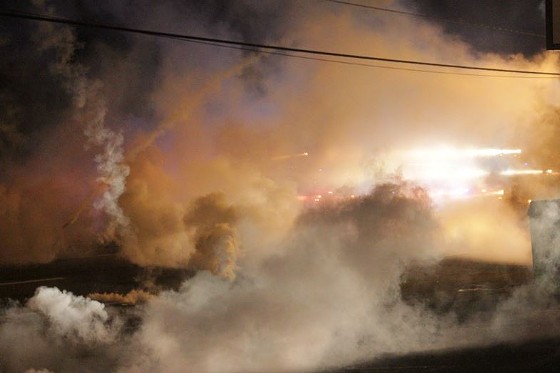 8:56: Hundreds of protesters marched toward the police command center located in the Buzz Westfall shopping center. Johnson said multiple molotov cocktails were thrown at officers, who deployed tear gas "in order to disperse the crowd and stop the violent action."

9:15: Police received a call that a large crowd was gathering at the McDonald's on the corner of West Florissant and Ferguson. Five minutes later the restaurant was overrun and employees had locked themselves in a storage room.

Johnson said he received multiple reports of additional moltov cocktails thrown at officers throughout the night, an escalation that demanded a higher level of response from police.

"For those who would claim that the curfew was what led to tonight's violence, I would remind you that this incident began before 8:30, three-and-a-half hours before the curfew," he said. 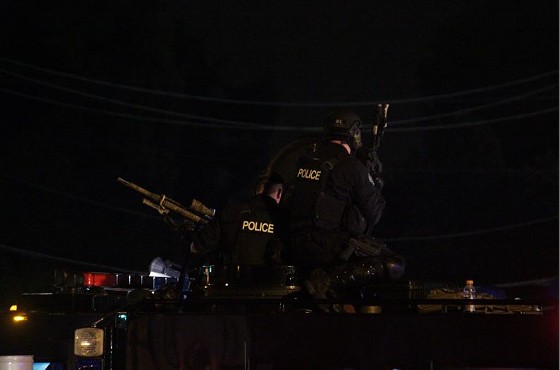 Two or three people were injured by gunfire coming from within a crowd of protesters, said Johnson. Police made "seven or eight" arrests as well. He did not explain how police determined that last night's violence was coordinated or preplanned.

Update continued: In a statement issue this afternoon, Governor Nixon described the the National Guard's "immediate and limited responsibilities" in Ferguson from here on out.

The Guard is tasked with protecting the police's Unified Command Center at the Buzz Westfall shopping center, which law enforcement officials claim was the target of a "coordinated attack" last night.

Police have yet to specify the nature of the alleged "coordination," or how last night's violence -- which included gunfire and molotov cocktails directed at police -- differed from previous molotov cocktail attacks. Photos of protesters lighting rags stuffed in bottles began circulating on Wednesday last week, but no one claimed that those attacks were evidence "coordination."

Here are some of the photos of protesters using molotov cocktails last week, courtesy of Post-Dispatch photographer David Carson.

#Ferguson people questioning my statements about Molotov cocktails, I saw three separate incidents have pix of one pic.twitter.com/x4GY1D5SAS

"Last night, Ferguson, Missouri experienced a very difficult and dangerous night as a result of a violent criminal element intent upon terrorizing the community. As long as there are vandals and looters and threats to the people and property of Ferguson, we must take action to protect our citizens.

Following coordinated attacks last night both on civilians and law enforcement officers, I signed an executive order directing the Missouri National Guard to help restore peace and order in Ferguson. The Guard's immediate and limited responsibilities under the direction of Colonel Ron Replogle of the Missouri State Highway Patrol, are to provide protection, and ensure the safety of our Unified Command Center, which was the target last night of a coordinated attack. The Guard will concentrate its resources on carrying out this limited mission.

With these additional resources in place, the Missouri State Highway Patrol and local law enforcement will continue to respond appropriately to incidents of lawlessness and violence, and protect the civil rights of all peaceful citizens to make their voices heard. We will not use a curfew tonight.

Again, I join the people of Ferguson, and all Missourians, in strongly condemning the violent acts we saw last night, including the firing upon law enforcement officers, the shooting of a civilian, the throwing of Molotov cocktails, looting and a coordinated attempt to overrun the unified Command Center.

We are all frustrated and looking for justice to be achieved regarding the shooting death of Michael Brown. As the dual investigations continue into what happened nine days ago at Canfield Green, we must defend Ferguson from these violent interlopers so that the peaceful protests can operate in peace and the search for answers and justice can continue."

Here's Nixon's original statement from early this morning, which accompanied his executive order calling the National Guard to Ferguson:

Gov. Jay Nixon has signed an executive order directing additional resources through the Missouri National Guard to help restore peace and order and to protect the citizens of Ferguson.

"Tonight, a day of hope, prayers, and peaceful protests was marred by the violent criminal acts of an organized and growing number of individuals, many from outside the community and state, whose actions are putting the residents and businesses of Ferguson at risk. I join the people of Ferguson, and all Missourians, in strongly condemning this criminal activity that included firing upon law enforcement officers, shooting a civilian, throwing Molotov cocktails, looting, and a coordinated attempt to block roads and overrun the Unified Command Center. These violent acts are a disservice to the family of Michael Brown and his memory, and to the people of this community who yearn for justice to be served, and to feel safe in their own homes. Given these deliberate, coordinated and intensifying violent attacks on lives and property in Ferguson, I am directing the highly capable men and women of the Missouri National Guard to assist Colonel Ron Replogle and the Unified Command in restoring peace and order to this community."