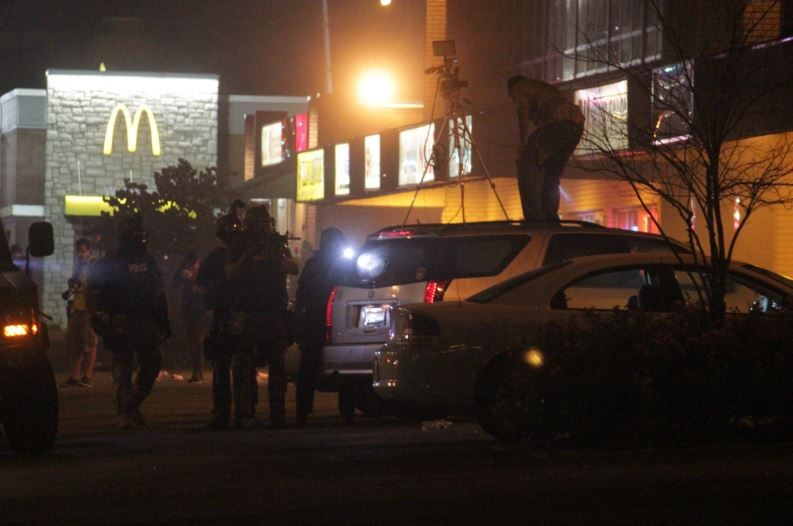 As armed protesters facing off with heavily militarized security forces continue to clash in nightly violence in Ferguson, journalists on the scene are increasingly coming under threat of arrest or injury from police officers.

With tens of thousands of people watching via live stream, a police officer threatened to shoot a reporter filming police efforts to quell an increasingly violent protest in Ferguson Sunday night.

Off camera, the officer barks at the KARG Argus Radio cameraman: "Get that light off. Get the fuck out of here, or you're getting shot with this," referring, apparently, to the firearm he's carrying.

A cop just threatened to shoot the cameraman at the Argus Radio feed.

Here's the video: The police captain liaising between police and the media steps in to explain that officers need camera lights turned off behind the front line for their own protection, but he declines to give the name of the officer who threatened the radio station reporter.

#Ferguson cops threatening media, pointed a gun at http://t.co/N5d16To3zj and our producer got shot with a bean bag. pic.twitter.com/BZfYxOCuhs

To call this a volatile situation is an understatement. Cops yelling at media crews w/ lights on, saying he would shoot. #Ferguson

Capt Johnson is now arresting us.

Captain Johnson arrested us for 2 minutes. We pleaded that we had followed every instruction. He let us go.

They had to cut my cuffs off with a knife. Here's Capt Johnson assisting. pic.twitter.com/IH7GHV5h74

Police pointed weapon and me and Capt Johnson has threatened me with arrest. He has called squad car. V jumpy

Just cuffed and searched as we said we were leaving as he asked. Johnson was following us saying bring the ... https://t.co/K106v4t5Qu

Klemko explains what went down:

About 25 minutes after the gas attack, with the smoke cleared and the area secure, we attempted to go back down the street to report.

Cops stopped us. We explained ourselves. They said to walk away. We said why. They said command center was attacked. I said no it wasn't.

Capt Johnson said walk away or be arrested. I started walking away. They followed and arrested us.

Klemko kept a little something to remember it by:

When they cut cuffs off minutes later, I held onto it. Johnson tried to take it. I said "it's a ferguson souvenir." pic.twitter.com/89t6G49FId

Chris Hayes was reporting live on MSNBC when a police officer threatened to mace him, yelling, "Media do not pass us, you're getting maced next time you pass us." Why did police threaten Hayes? He answers on air: "Because they're generally hopped up and angry and pissed off and aren't excited there's about fifteen reporters watching what they're doing."

Riot cop to me just a few minutes ago: "Get back! Or next time you're gonna be the one maced."

If you walk about 100 feet from OK'ed press area you find yourself lit up by a spotlight and a squad of police on hair trigger.

Two journalists from the Washington Post and Huffington Post were arrested last week when they didn't leave a McDonald's being cleared by police quickly enough.