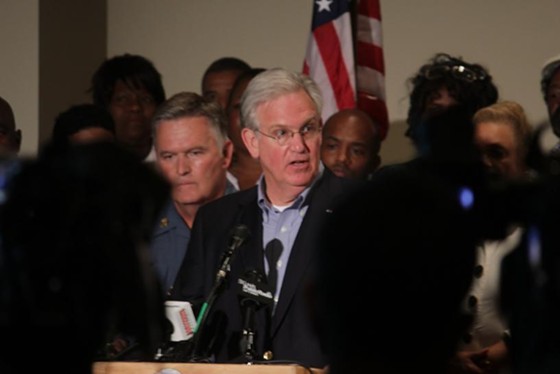 Amid a gathering of law enforcement, members of the media, protesters and citizens at Greater St. Mark Family Church on Saturday afternoon, Missouri Governor Jay Nixon declared a state of emergency in Ferguson and imposed a curfew for this evening that will require city streets to be clear between midnight and 5 a.m.

In an ongoing effort to calm the tension between citizens and police forces after the August 9 shooting death of Michael Brown by Ferguson police officer Darren Wilson, Nixon thanked both groups for working together during the relatively peaceful August 14 and August 15 protests and declared his support for protesters' First Amendment rights. But the late-night looting in Ferguson by a few individuals last night forced his hand, he said.

"I share their frustration and their conviction that we cannot allow the ill will of the few to undermine the goodwill of the many, while putting the people and businesses of this community in danger. If there was an easy way to separate those who hurt from those who help, we would," Nixon said. "But it's hard, and especially at night, we can't.

"So to protect the people and property of Ferguson, today I signed an executive order declaring a state of emergency and implementing a curfew in the impacted area of Ferguson," Nixon continued.

Gov. Jay Nixon praises the "courage and resolve" of demonstrators who tried to stop looters. pic.twitter.com/pv5ZoSXt4E

Citizens resoundingly refused the curfew, reminding Nixon about their self-policing efforts and their success at blocking looters from entering many Ferguson businesses early Saturday morning. A New Black Panther leader requested that Nixon extend the curfew's start to 2 a.m. to give his and other groups time to peacefully mobilize protesters from the area once again.

Missouri State Highway Patrol Captain Ron Johnson, whose patrol had taken command of police activities in Ferguson on August 14 under Nixon's orders, acknowledged many groups for helping his squad maintain order. However, he agreed with Nixon that a curfew was the best course of action to keep the area calm and to clear the streets for emergency vehicles.

Johnson thanks the new black panthers, others for keeping peace thursday, but cops will enforce curfew. Asks activists to help. #Ferguson

The news conference became heated as citizens argued with Johnson, Nixon and even themselves over how to handle this evening's planned protest.

Someone at presser interrupts Nixon: "You need to charge that policeman with murder!" He grimaces and continues speech. #Ferguson

Not for the first time, a press conference in Ferguson has descended into what can only be described as a shitshow

Johnson later confirmed that tear gas and armored trucks would not be used to enforce the curfew Saturday night.

Nixon said that Johnson would set up a staging area for media so reporters can observe "openly and fairly."

"Clearly, the media has a role in helping here." - Gov. Nixon #Ferguson doesn't say if curfew will apply

Nixon was asked, but did not answer, whether the media will be allowed on to Ferguson streets to observe the curfew

Gov Nixon declared a state of emergency and set a curfew in Ferguson. SLMPD will help with 50 officers. #fgs

"If we are going to achieve justice, we must first have -- and maintain -- peace," Nixon said.