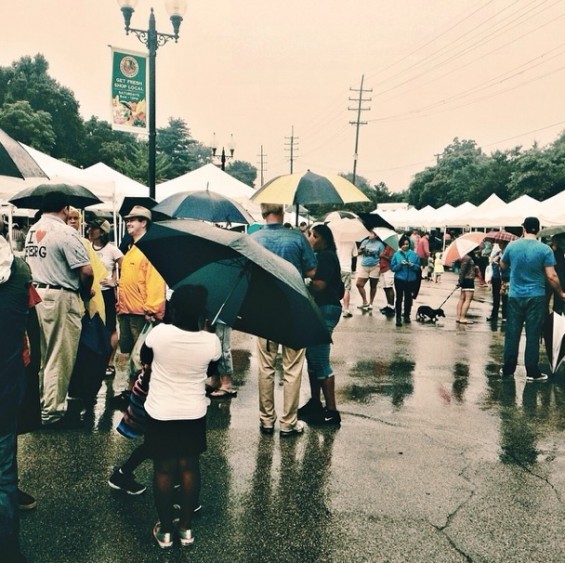 Rain usually puts a damper on outdoor events, but the waterworks only whipped up a storm of support for the Ferguson Farmers Market on August 16.

The morning after a tumultuous night, community champions braved a downpour to purchase fresh produce and share a few smiles in a town that has been at the epicenter of international news after the shooting death of resident teen Michael Brown on August 9.

#Ferguson The Farmers Market is the pride and joy of downtown Ferguson. It goes on today, despite weather, turmoil.

The Ferguson Farmers Market, located at 20 South Florissant Road, has been in business since 2002, quickly becoming a source of pride and camaraderie for the city's residents. The market's website boasts, "This Saturday morning tradition brings you fresh fruits and veggies, picked within 24 hours of our market and brought directly to you by the friendly farmers who grow them."

The August 16 market began at 8 a.m., with 40 vendor tents and plenty of colorful umbrellas dotting the scene:

Hungry tummies quickly drew shoppers to the food tents, where people picked up local fruits and vegetables, sauces and spices and plenty of desserts:

I didn't know they had Jamaican food at the #Ferguson #farmersmarket! pic.twitter.com/88uISz1GOM

And many sales benefited Ferguson charities:

The Mayor of #Ferguson rocking his #IHeartFerg Right now at farmers market pic.twitter.com/pKrf1vXkFj

"I Love Ferg" shirts sold out fast this morning, now writing down names for orders. pic.twitter.com/rlxzJGd6i7

One thing shoppers didn't need money for was hugs; those were free:

This is the real #Ferguson. pic.twitter.com/AQSuHTMvD4

And despite the lingering unrest and the stormy weather, the Ferguson Farmers Market brought a little joy to a Missouri town that's been around since the 1800s:

Pure happiness filling the #Ferguson farmers market. It's pouring & people are dancing in the rain. Theres light if u choose to focus on it.

Read our complete coverage about Michael Brown and Ferguson.