Police Ease Up On Ferguson Protesters, But Reasons for Protest Not Forgotten 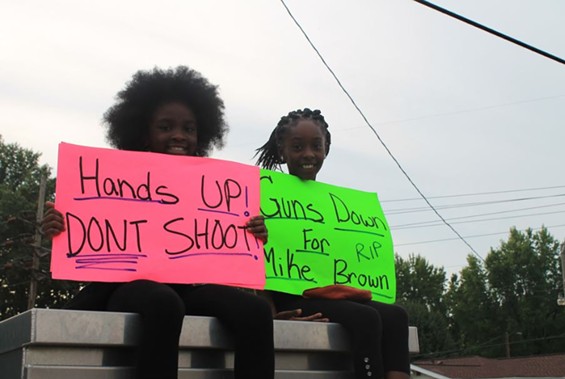 Police on West Florissant Avenue Thursday were hugging and taking selfies with smiling protesters. It was a stark difference from the previous nights, which saw protesters screaming insults at officers in riot gear, who would then march down Ferguson streets with armored trucks, firing rubber bullets and lobbing tear gas, including at people in their own back yard.

Despite the good cheer and photo-ops, many local residents and protesters Thursday told Daily RFT that though the mood was more positive, the reasons for coming out to protest in the first place are still very much on their minds.

Flora Busby, who lives on a side street that runs adjacent to West Florissant, where the protests have been taking place since Sunday, is not too happy with the police these days. After all, police threw tear gas into her back yard Monday night while she was in it. Daily RFT was there to capture the moment, seen below. Busby comes in toward the end to see what the commotion is about. She's in her sixties and had to suddenly run to avoid getting hit by an incoming tear-gas canister.

As Busby sat on her front porch Thursday, the sounds of protesters shouting and cars honking dominated the well-kept, tree-lined street, but it was a welcome difference from the previous nights.

Still, she says, the problems with the police around here run deep.

"It was just a matter of time before something happened," said Busby, who has lived in Ferguson for twenty years. "The Ferguson police are so crazy. All they do is harass all these youngsters around here. They harass everybody for no reason."

She spoke of herself and relatives getting constantly pulled over and talked down to by police officers. In Ferguson almost 90 percent of traffic stops are black drivers. Black people make up 63 percent of the city's population.

But despite the problems put upon her by both the police and the protests, she's optimistic about the police situation improving.

"I think it's gonna change," she said. "It should. If it don't, it should. From darkness, comes light, you know?"

Standing on West Florissant Avenue taking in all the lively protesters waving signs and shouting chants, Stacey Burnaugh said it might have been like this all along if the police didn't come into the neighborhood looking like an invading army.

Terrel Thornton, 21, stood at the protest wearing a T-shirt with the words, "Fuck Ferguson, No Justice No Peace."

He explained that he made the T-shirt to show his frustration over problems with the Ferguson Police Department.

"I don't see how it's fair that the whole police force only has three black people and all the rest are white," he said, adding that arrest statistics show that black people are harassed and detained at a higher rate than white people.

"It doesn't equal up to nothing at all," Thornton said. "That's why I say, 'Fuck Ferguson.' It's not fair."

"If they had that, we'd know what happened to Mike Brown," he said.

A young man wearing a bandanna over his face who gave his name as "Kloud" said he wasn't impressed by the joyous atmosphere on Thursday; he wants Wilson, the cop who killed Brown, brought to justice.

"Everybody's using terms like 'if.' If it was a murder," Kloud said. "Nine times? Police are supposed to demobilize you -- not kill you," he said. "Nine times -- it wasn't an accident, man. What the fuck are we waiting on?

As for Captain Ronald Johnson of the Missouri Highway Patrol, who took over the St. Louis County Police Department's handling of the protests and has since been praised across the country for changing the mood by doing things like telling officers not to wear gas masks, Kloud wasn't impressed.

"He's the police -- he'll blow my shit, too. Police can get their way, they can kill you, and nothing will happen to them. Nothing," he said.

Despite the concerns about the police department, there was a sense of optimism, even if it was just about people becoming aware of a deep problem.

"People are realizing how fucked-up the police system is -- all colors, all races -- and I think it's beautiful, actually," said Amir Wakil, 22. "I'm so happy about all these people coming out here, different cultures and everything. But I feel there needs to be a lot more people out here. I feel like people gotta realize this is what we need to put our time into."

Standing next to Wakil was Elijah Murray, also 22, who said that he believes the protests will continue until major changes occur.

"I don't think racism is that big of a thing anymore: It's the PD taking the law into their own hands and killing off kids for no reason. I think they should all be fired," Murray said.

He concluded: "They expect us not to do this every day. But every day, we're gonna be out here protesting for a kid who died a wrongful death. He had his hands up. They took his voice, so we're gonna be his voice."