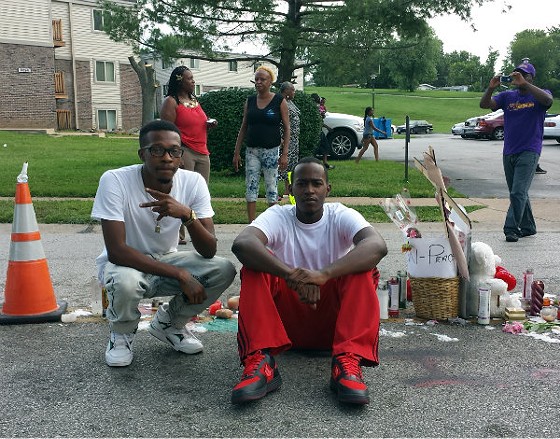 Last night, hundreds of demonstrators were allowed to do what Lesley McSpadden and Michael Brown Sr. tried to do on Sunday: march peacefully in the streets in memory of their slain son, Michael Brown Jr. (albeit in a reverse route, from West Florissant to Canfield Drive).

Canfield is a long curve, and further east, around the bend near Brown's grandmother's house, Anthony Livingston couldn't hear the throng of hundreds chanting. But the 21-year-old, a cousin and close friend of the teenager's, was heading that way from the family's home to see what this allegedly peaceful protest was all about. He told Daily RFT that he and much of the family had been avoiding marches and the flurry of media coverage since Brown's death and the onset of violent protests.

"You can't even wake up in the morning and turn on the the TV without hearing about it," he said. "This is somebody I was with all the time, and to see that picture of him lying in the street -- it's sick. It's sick."

Read all of our coverage on Michael Brown and Ferguson since Sunday here.

On Sunday evening, a day after eighteen-year-old Brown was shot and killed by a Ferguson police officer, family, friends and demonstrators lit candles and tried to march in the street from Canfield Drive to West Florissant. But when they got to the intersection they were met by a wall of police officers. Another one of Brown's cousins, Eric Davis, believed this lit a spark that eventually led to the night's rioting and looting.

"One of the police set a flare off when we approached them. The crowd started to disperse, people started throwing things at the police. I took my family and left," he told Daily RFT Sunday night. "Michael's mom was in front, she turned around as well to head back to her mom's...she said, 'They shot my son, and I thought they were going to shoot me too.'"

Last night's march was very different. Police, lead by their new operational commander, Missouri State Highway Patrol Captain Ronald S. Johnson, walked in front of the crowd of hundreds, making sure everyone got safely to the spot where Brown died. Then demonstrators chanted and listened to speakers for several minutes.

Livingston and a couple of Brown's other cousins watched from the periphery. They didn't join in, nor did they follow as the marchers turned back toward Florissant. They talked about how they were handling the past five days, during which their goofy younger cousin suddenly became an internationally known symbol of racial injustice in the U.S.

"This is not just for Mike Mike," said Livingston. "This is for everybody."

The men all tell the same story -- just days before he was shot and killed, Brown had been telling everyone that he was going to be famous.

"But he was thinking it'd be for his music," said 21-year-old Darris Johnson.

And now that he is famous, they said they are struggling with aspects of what that means. They recoiled when people who were never friends with Brown started claiming him as a family member or a "homeboy."

"I'm looking at them like, 'Who is you?'" said Livingston.

Though they avoid watching the news, there's no avoiding the street vendors in the neighborhood who've turned up hawking T-shirts and buttons with Brown's face on it. Livingston said he confronted a button vendor just the other day.

Just then, Markese Mull, a family friend who lives in the same apartment village as Brown and his grandmother, walked up and offered some big-picture perspective.

The cousins started to nod.

"St. Louis is going to be a changed city..." Mull continued.

While this idea is heartening, there are also difficult developments soon to come -- like what, if any, charges the officer who shot Brown will face.

"If he don't get locked up, they're really going to see something. They think they seen something?" said Livingston ruefully. "It's sad to say."