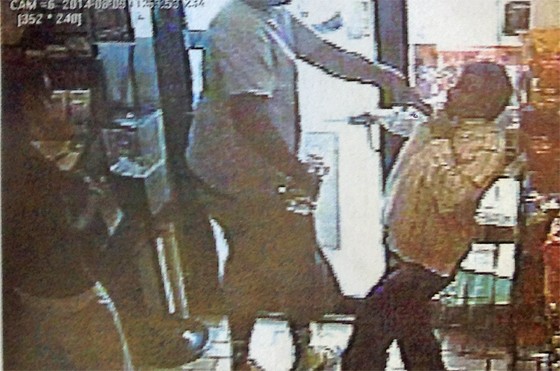 Ferguson police this morning released the name of the officer who shot and killed Michael Brown on Saturday. Darren Wilson is a six-year veteran of the Ferguson police force with a clean record, according to Chief Tom Jackson who delivered the long-awaited news at a press conference this morning in Ferguson. Jackson also told the 150-plus journalists at the scene that Michael Brown had been involved in a strong-arm robbery of a convenience store just before Wilson fatally shot him.

But which convenience store that was, police aren't saying. In a sixteen-page incident report about the robbery (viewable below), police whited-out the name of the store where Brown and his alleged accomplice, 22-year-old Dorian Johnson, are said to have stolen a box of Swisher Sweets cigars valued at $48.99. Ferguson police also struck from the record the names of other officers who responded to the robbery and the name of the store manager who tried to stop the alleged thieves before being pushed out of the way.

Surveillance photos, however, show a suspect that seems to match the identity of eighteen-year-old Michael Brown pushing the store manager as he exits the building.

See also: Police Tear Gas Ferguson Residents in Their Own Back Yard

Although police have yet to release the name of the store that Brown and Johnson allegedly robbed, it's clear it was not the QuikTrip on West Florissant Avenue that looters burned down Sunday night in anger over Brown's killing.

In the incident report, police say the store manager pointed "up W. Florissant toward QuickTrip" and said, 'He went that way.'"

The robbery occurred August 9 between 11:52 and 11:54 a.m. Officer Wilson later encountered Brown and Johnson at 12:01 p.m. in the 2900 block of Canfield Drive. Brown lay on the street dead from gunshot wounds moments later. Police have said that Brown physically accosted Wilson and tried to get the officer's service revolver before being shot.

News of Brown's involvement in a robbery just prior to his killing did not sit well with several community members who attended this morning's press conference on the site burned-down QuikTrip. After a visibly shaking Chief Jackson delivered his brief remarks, several residents shouted out their suspicions about this latest wrinkle to the case that has brought international attention to Ferguson.

"Why you just coming out with this robbery stuff now?!" screamed one woman. "Where was that days ago?"

Continue on to view the full robbery incident report.