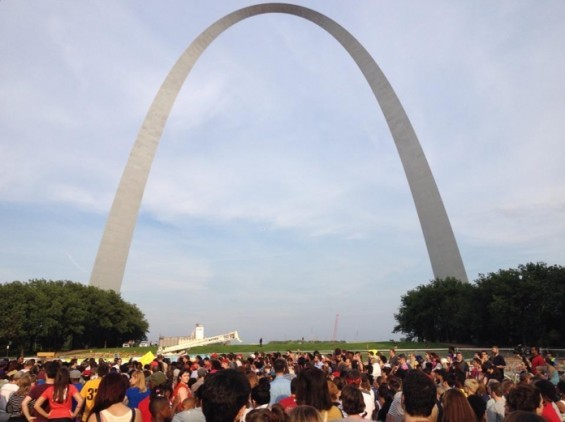 The shooting death of eighteen-year-old Michael Brown has elicited plenty of reaction -- from Brown's family members who lost a college-bound young man, from citizens who protest the police's handling of the case, from militarized police officers who point sniper rifles at residents and from concerned readers who watch the events unfold from their living rooms near and far.

But one of the most widespread and affecting reactions has been one of support, change and peace.

On August 14 cities around the country used social media to offer strength to Brown's family and the people of Ferguson through #NMOS14, an organized national moment of silence. Taking a cue from St. Louis, where Brown's mother thanked thousands of people under the Gateway Arch, masses gathered peacefully at community landmarks, on college campuses and near justice centers in Philadelphia, Miami, New York and beyond for fellowship, with participants often raising their hands in the now-familiar "Don't shoot" gesture and posting photos to Twitter, Instagram and Facebook. It's been reported that more than 100 cities held #NMOS14 events.

Below, we've collected a few of our favorite photos from #NMOS14 events throughout the country and, in one case, the world.

Read the Riverfront Times' complete coverage of Michael Brown's death and the unrest in Ferguson.

Beautiful crowd at #NMOS14 in #DC. A lot of people needed this. pic.twitter.com/8YawGF6Etc

100+ raise hands in downtown Miami's federal justice building in solidarity with those in Ferguson. #HandsUpDontShoot pic.twitter.com/qrZo7O5ANA

50 min in & crowd in Boston is bigger than ever. #NMOS14 #HandsUpDontShoot pic.twitter.com/tPYTCujukf

Continue for even more photos.

#DONTSHOOT is the chant here on the Block in Baltimore #NMOS14 pic.twitter.com/QoBRkykKQR

Holding hands for 4 min in silence in Daley Plaza. Can only hear a few clicks from cameras and the wind #NMOS14 pic.twitter.com/ZnwscebFyA

Even our friends across the pond got in on the act of love: