St. Louisans From Far and Wide Clean Up Ferguson After Protests 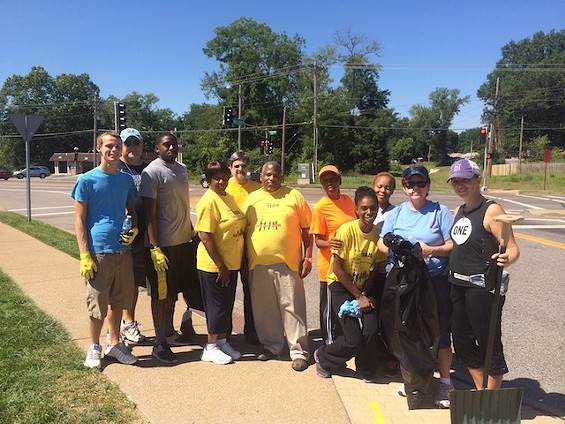 Nighttime in north county is mired with heated confrontations between protesters and police, but during the day people from all over the city come to clean up.

Though looting ended on Sunday, nightly protests persist, and broken glass and garbage -- not all left over from protests -- line the streets.

About 100 people gathered at First Baptist Church in Ferguson Wednesday to clean up trash and ask business owners what other help they need. One volunteer passed out "I Heart North County" signs before the group dispersed. People traveled from places including Arnold, Winfield, St. Charles and St. Peters to help. After a brief prayer, half of the group went to South Florissant Road near the Ferguson police station, and half went to West Florissant Avenue where the looting took place Sunday night.

See all Riverfront Times' coverage of the protests in Ferguson.

The West Florissant crew started at the Taco Bell near Chambers Road and worked its way down toward the charred QuikTrip and the boarded-up Ferguson Liquor Store.

Carmen Kenton, a Jennings resident, spoke with Que Qualls, manager of Advance Auto Parts, as she swept up shattered glass and cigarette butts in front of the store. Qualls said the store took a $28,000 hit after protesters broke the front window and stole merchandise. Normally the store stays open until 9 p.m., but it has been closing at 7 p.m. for the past few days.

Cars drove by and honked in support of the effort, and 68-year-old Bernice Deardeuff rang a cowbell while her son, Steve, applauded from their back yard, which backs up to West Florissant. Steve Deardeuff has gotten up early every morning since the protests on West Florissant, and he's started to pick up glass and garbage on the side of the street.

"I've lived here for 60 years," Bernice Deardeuff said, and she's never seen anything like what's gone on for the past few days. "I'm a little nervous, but we have wonderful neighbors." She said she'll never move.

Derrick Thomas grew up in the same subdivision as Deardeuff.

"It ain't us," Thomas said. "We never had no problems in this neighborhood, never had trouble. Now you got people from other neighborhoods coming in and tearing our stuff up."

Thomas said he's worried for his mother who has lived in the subdivision since 1975, but he said she won't leave Ferguson either. So far, the protesters haven't damaged any homes in the subdivision, but Thomas suspects the demonstrations aren't over.

"This is one big family out here," said Dan Pisciotta, one of the men who joined the effort. Pisciotta grew up in Florissant but recently moved to St. Charles. "This used to be our area," he said. "Our old stomping grounds. It's heartbreaking to see it like this, but good to see some of the positive stuff going on."

The three men borrowed gloves and trash bags from the group that left from First Baptist Church and continued to pick up trash. Other members of the community who saw the volunteers joined too. Thirty minutes after the first group of volunteers arrived, the effort on West Florissant doubled in number.

Joe Costephens, a pastor at Passage Church in Florissant, organized the original group that gathered at First Baptist Church. He said the clean-up effort will be ongoing as needed.