For awhile, Wednesday night's protest in Ferguson looked like the most peaceful gathering since the Saturday shooting of an unarmed black teenager named Michael Brown. The calm wouldn't last long.

Read all Riverfront Times coverage of the unrest in Ferguson and the aftermath of Michael Brown's shooting. 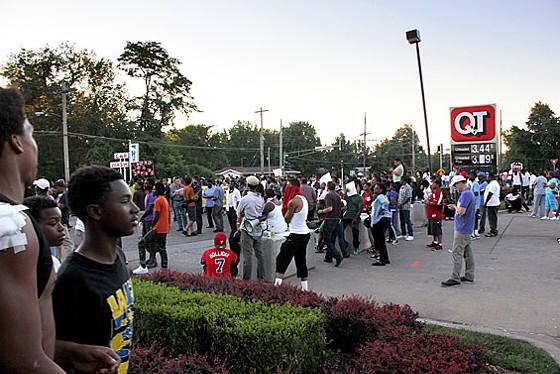 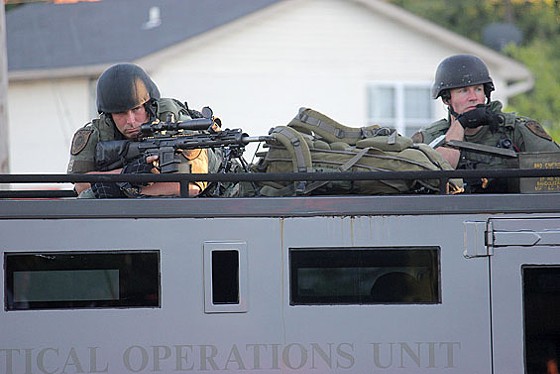 Around 8 p.m. the situation quickly turned chaotic. Bystanders later told Daily RFT they saw a protester throw a glass bottle and a Molotov cocktail at the police line, observations that were backed up by photos.

In any case, the cops decided it was time to force the protesters out. One officer shouted through a megaphone, "Leave the area immediately! The peaceful protest is no longer peaceful!"

Soon after, officers began launching tear-gas canisters and stun grenades at the crowd.

Continue for more photos of the police response, as well as residents talking about what they think could end the chaos in Ferguson.

Under the onslaught of tear gas, the protesters retreated into residential streets off West Florrisant Avenue. The cops pursued them.

By 9 p.m. most of the protesters had dispersed into the surrounding neighborhood. As police moved back toward the bridge, some residents came out to to survey the aftermath.

"They supposed to be helping us, why they scaring us?" said one onlooker. He and a few friends were gathered on a corner near the QuikTrip. They watched the heavily armed officers slowly move south on West Florrisant Avenue. "Why they out here shooting at us? They out here shooting tear gas at young kids, innocent women and stuff."

One of his friends interjected.

"There are dogs outside. People got their windows up, so the smoke gets in. There are kids in the house," he said. "It's war right here. Basically, it's all the citizens versus all the police. And the citizens ain't going nowhere."

Police arrested another dozen or so people Wednesday night, including Wesley Lowery, a political reporter at The Washington Post, and Ryan Reilly, a Huffington Post justice reporter. Both were released without charges.

At the same time, on the front lawn on the 9600 bock of West Florrisant Avenue -- within view of the QuikTrip -- smoke was rising from a freshly lit grill. A household was throwing a wedding party, one planned long in advance of the present riot. Some guests flew in last week for the occasion.

"It's ridiculous," said Kim, one of the party guests. She said she lives in Ferguson, just past the QuikTrip. "We're trying to celebrate people uniting, and then all this happens."

Kim told Daily RFT that she works a late shift at her job, but police roadblocks and the volatility on the streets have prevented her from clocking in for the past two days. She couldn't even get home with the cops blocking the bridge. Yet, she doesn't blame the cops for that.

"I know they can't control what is going on. They have to keep themselves safe too," she said.

But Kim did hold the police responsible for general unrest in the streets of Ferguson.

"It's not going to pass on until we get answers, until that officer is locked up, because he murdered that boy. It's plain that he murdered that boy," she said. "But the police are not telling us what happened. Until then, this," she waved toward the cop cars, sirens and discharged tear-gas grenades on the street.