Two Shot in Separate Incidents During Another Tense Night in Ferguson 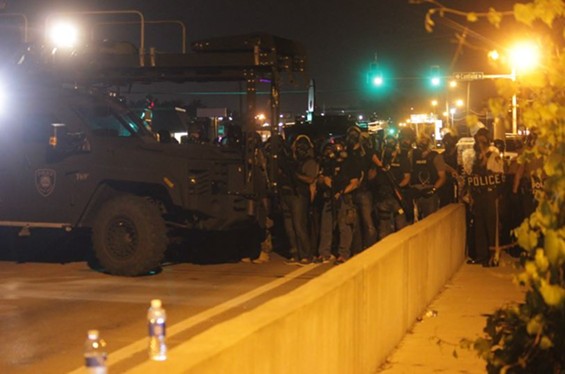 After meetings all over the St. Louis area called for peace, dialogue and justice, another drama-filled night took place on West Florissant, near the QuikTrip that burned on Sunday night and not far from where Reverend Al Sharpton appeared with Michael Brown's family.

According to multiple media reports, two shootings took place. First, a drive-by hit a young woman in the head a little past midnight. Later, a St. Louis County police officer shot and critically wounded a man police say pulled a gun on an officer.

A St. Louis County police officer shot the man near the intersection of West Florissant and Chambers Road around 1 a.m., police confirmed to the St. Louis Post-Dispatch, near the site of the fatal shooting of Michael Brown, the unarmed eighteen-year-old who was shot to death by a Ferguson cop.

See more Riverfront Times coverage of the unrest in Ferguson and the death of Michael Brown.

Police spokesman Officer Brian Schellman tells the P-D that police were responding to a call of four or five men in ski masks shooting off shotguns in the area. When police arrived and saw men running away, an officer approached one of the men, who pulled a handgun on the officer. The officer then fired, police said.

On Wednesday, August 13, 2014, at approximately 1:00 AM, officers from the St. Louis County Police Department's North County Precinct received a call for four subjects wearing ski masks and armed with shotguns, in the area of Chambers and Sheffingdell. At the same time this call was dispatched, several calls were received for shots fired in the same area. When officers arrived, multiple subjects began running from the scene. One officer encountered a subject who brandished a hand gun, pointing it directly at the officer. Fearing for his safety and the safety of others in the area, the officer fired shots, striking the subject. The subject was transported to a local hospital, where as of this writing, he is listed in critical condition. The subject's handgun was recovered by police at the scene. This is an ongoing active investigation. I have no further details regarding this incident at this time.

The man was taken to the hospital, and police recovered a gun at the scene. This morning, medical supplies and a blood stain can still be seen in the spot where the man was shot. 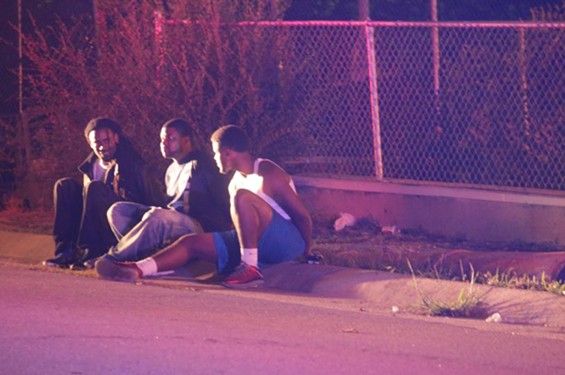 A woman was also shot Wednesday night just after midnight. Police confirm to the P-D she was shot once in the head in the 1300 block of Highmont Drive, near the QuikTrip gas station that's served as a rallying point for protesters since Brown's death last weekend. The incident appeared to be a drive-by shooting, and its connection to the surrounding protests is unknown.

Update: A selfie apparently taken by the shooting victim has been circulating on social media since early this morning. Daily RFT has reached out to her to confirm. Her previous Instagram photos include several shots of Ferguson protests.

We're waiting on a return call from police and will update the story when we know more.