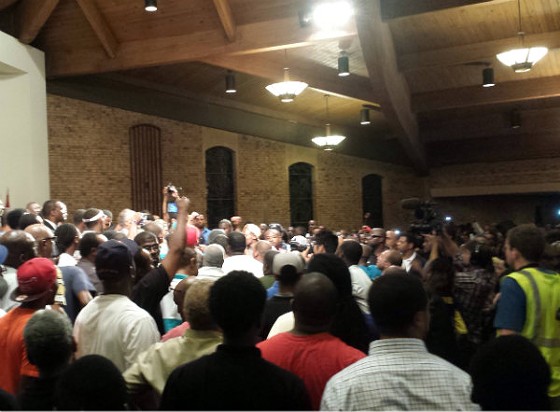 Many have noted that at Michael Brown rallies, like the one convened by the NAACP on Monday evening, the crowd that arrives to speak about nonviolence and collaboration is older and predominantly female. That might have also been the case last night at the Greater St. Mark's Family Church, where Reverend Al Sharpton appeared with Brown's parents and their attorneys.

However, early on, a cheer rose up from the packed pews when a speaker announced that "200 youth" were headed for the church from the QuikTrip on West Florissant just a few blocks away. When they arrived chanting "no justice, no peace," the audience burst into applause.

See more Riverfront Times coverage of the unrest in Ferguson and the death of Michael Brown.

Before Sharpton took the dais, Brown family attorney Benjamin Crump gave a rousing speech calling this the "worst police shooting" he'd ever seen, and comparing the Brown family to the Trayvon Martin family, whom he also represented.

"Nobody expects to become the martyr of a dead child," he said. "Trayvon Martin was shot by a single shot by an untrained civilian. Michael Brown was executed by a trained police officer."

Brown's parents Michael Brown Sr. and Lesley McSpadden sat onstage just behind the podium but did not speak. Eric Davis, a cousin, spoke on behalf of the family asking for "continued support in a peaceful, calm manner." He also reiterated that Brown had been a peace-loving person, so much so that he didn't go out for football for fear that he could "hurt people."

And then Sharpton took the podium:

"You got issues in this town. The reason for our outrage is, when you keep pressing people down anything will make them open up their mouths," he said to raucous applause, his points sometimes punctuated by a couple of chords from the church organist.

But Sharpton also asked for a return to order in Ferguson.

"If the family ask you to operate in a certain way, respect the family. They haven't even buried their son and people are scarring his name," he said. "We need to use this as a moment to come together.... Old and young to come together and stand as one."

At the end of his remarks, Sharpton made a plea directed at the QuikTrip demonstrators in the crowd, in particular the young men.

I want one hundred brothers to come up here --Sharpton #michaelbrown https://t.co/LqBCFoKdUf

Sharpton said he wanted all the young men to sign up to become "justice disciples" that meet regularly and patrol the neighborhoods to "keep order" and "protect the women." He asked that they sign up on a sheet at the door and hold a meeting today at 11 a.m. at St. Mark's.

The speech concluded with a collection taken for the family. Speakers also announced that a new GoFundMe page for the family is now live. "They are going to be missing days from work, will need money for bills, food and all of that while they go this troubling time. This money can be used for his Burial, Legal Expenses, A Memorial Fund or what they need it for," the site says:

Afterward, Chambers Street was lined with cars and young people who'd poured out of the church. They would later make their way back down toward the QuikTrip, where the tone of the evening changed dramatically. Read more about that here:

-- Two Shot in Separate Incidents During Another Tense Night in Ferguson -- Peaceful Crowd of Protesters Dispersed By Heavily Militarized Police Force In Ferguson Email the author at [email protected].