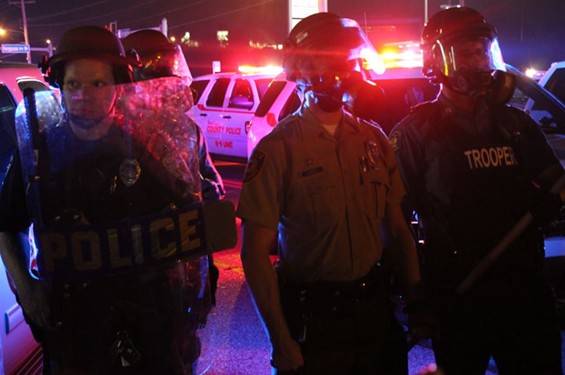 Late-night protests against the Michael Brown shooting and police brutality Tuesday ended in more tear gassing that was caught on video by a bystander who sent the footage to Daily RFT.

The incident occurred at approximately 1 a.m. Wednesday morning. For several hours beforehand, approximately 50 people were protesting a police barricade set up on West Florissant Avenue near where Brown was killed. They were joined by a larger group from a separate protest and, after an energetic and peaceful assembly complete with chants and prayers, the group began to move down the street toward West Florissant Avenue and Chambers. 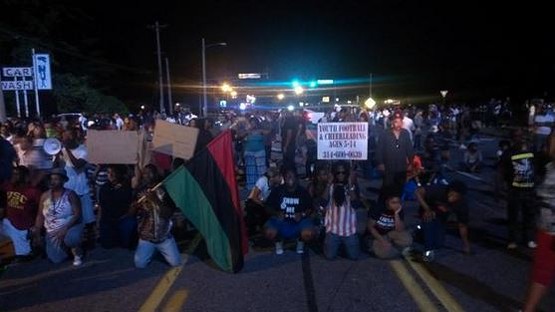 The group was lively, with many shouting and chanting, "No justice, no peace!" Several other protesters were singing along to a song by rap artist Lil Boosie titled "Fuck Da Police." The song was blasted from a slow-moving truck carrying several protesters in its bed, as well as on the roof and hood.

By the time the contingent reached Chambers, witnesses say, the group had largely quieted down, several people had gone home and those who remained continued to peacefully protest near police monitoring road blocks. But not long after the protesters arrived, witnesses say, armored trucks were brought in and tear gas deployed.

"They weren't fighting or arguing or yelling or anything, and then the police came with all their gear," said protester Deena Adair. "The trucks came in and just started shooting at them, shooting tear gas."

"The protesters were shouting 'fuck the police,' but who wouldn't say that?" said another man who witnessed the incident.

Protester Stanyale Riley captured video, shown above, of police marching in riot gear and launching tear gas toward a small group of protesters.

"Tear gas. Just like that. That's what they feel about your civil liberties. You have no rights in the United States. Trust and believe me," Riley says in the video. "No right but to go your ass to work and continue to support their system. That's it."

At that moment in the video, a police officer "suggests" Riley and her friends, including protester Tara Thompson, to leave the area:

RILEY: "It's a suggestion, right?"

OFFICER: "It's a suggestion, but it will be an order in about two minutes."

THOMPSON: "So we can't peacefully assemble?"

OFFICER: "No, ma'am, because now this has become unruly."

RILEY: "But y'all made it unruly. I sat here and watched it the whole time."

OFFICER: "OK, but I'm telling you, if you don't leave, you will be arrested.

THOMPSON: "But what are the charges?"

OFFICER: "Why are you here?"

OFFICER: "You're protesting what now?"

THOMPSON: "We're protesting a [inaudible], and it's not being investigated."

OFFICER: "OK, well, you guys stay there, then. But I already gave you a fair warning."

The officer doesn't answer and walks away.

Daily RFT reached out to officials at the St. Louis County Police Department to ask why tear gas was used on protesters. They have yet to respond, but we will update as soon as we hear back.