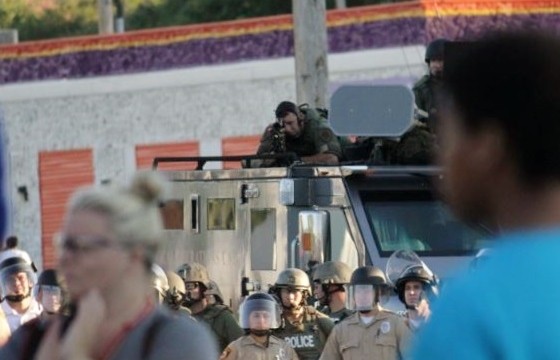 An initial pass down Ferguson's West Florissant Road on Tuesday night, at approximately 6:30 p.m., saw the area in a state of relative calm. Stationed at the burned-out Quiktrip located on the 9400 block was a gathering of 80 to 100 protesters, holding signs and encouraging passing cars to honk their horns in response to the now-familiar chanted refrain of "Hands up! Don't shoot!". The activists would then smile in encouragement when drivers complied, as multiple demonstrators handed out bottles of water to the thirsty people on the scene. The overall feeling was one of peaceful determination and a resolute desire for justice.

Then, the police showed up.

At approximately 6:45 p.m., St. Louis County police vehicles arrived on the scene and officers began to form a line in the center of the street, facing the throng. As they took formation, the mood began to shift.

See also: Police in Ferguson Fire Tear Gas at Residents in Their Back Yard

"What is your purpose here?" a woman shouted through a bullhorn. "What is your jurisdiction? Identify yourselves, please." Outfitted with riot protection helmets and armed primarily with batons and shields, the officers offered no response.

Protesters question the police about their names and jurisdictions in the absence of identification. (All videos by Daniel Hill for RFT.)

DeAndre Perryman, a season four American Idol finalist who was at the scene, approached Riverfront Times and pointed at the line. "The police are not wearing nametags," he said. "They don't want us to identify them, just like they won't identify the killer." As he spoke, a woman walked past, ominously advising all in attendance to "pull your masks up now."

"We've been keeping it positive out here," Perryman continued. "There's no rioting, no looting. It was like this last night too. Every time the police show up, that's when things get frustrating."

As the county officers blocked the southbound lanes of West Florissant at Northwinds Estates Drive, directing traffic to turn around and head back north, two armored vehicles approached from the south. By this time the "Hands up; don't shoot" refrain was getting louder, as the protesters stood steadfast on their side of the street. Occupants in redirected cars shouted "fuck the police" and "no justice, no peace" as they passed, and demonstrators increasingly began to cover their faces with T-shirts and other makeshift masks.

Just before 7 p.m. the line of baton-toting county patrolmen got into their cars and left as officers equipped with M4 carbine rifles took their place, wearing camouflage pants and vests loaded with extra magazines over their body armor. The armored vehicles, equipped with sound cannons, remained parked in the street just south of the Quiktrip. Lying prone on top of one of them, an officer peered down the scope of his rifle, which he had trained directly at the crowd.

Within only 30 minutes, and without any violence or crime committed by those assembled, the scene in Ferguson had moved from peaceful protest to occupied territory. 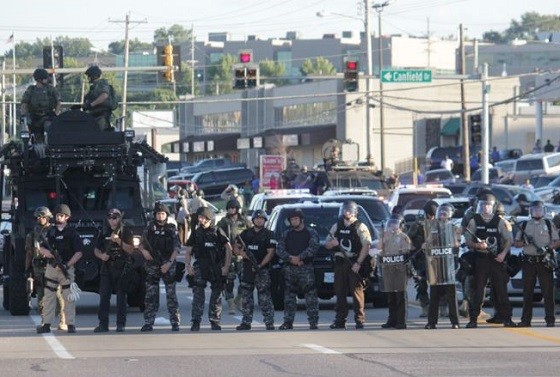 A woman forced to turn around at the blocked street stopped and addressed a nearby cameraman who was working with one of the local news stations. "They're walking all over our rights!" she exclaimed in frustration. "This isn't Iraq. This is America."

Angrily, she continued, "And ya'll don't report on it. I want to see this on the news tonight!"

As tensions continued to rise, that apparent dissatisfaction with the media hit close to home when one protester addressed Riverfront Times directly. "We don't want you here," she said, catching me scribbling on a notepad. "You are not welcome. Your service is done."

Another woman walked up and down the line of demonstrators, asking that everyone step out of the street. "They can't make us leave if we're on the sidewalk," she explained. Within minutes, however, the crowd dispersed at the insistence of the now heavily militarized force, which had increased greatly in numbers and moved to a position south of the Quiktrip, in front of the armored trucks. The assembly began walking in a group to the Christ the King United Church of Christ on nearby Old Halls Ferry Road, where the Reverend Al Sharpton and members of Mike Brown's family would speak.

The protesters leave the scene at the behest of the police.

"We outsmarted them," said one protester, who asked not to be named. "They wanted us to act up. This is how it started yesterday, when they showed up with tear gas. The police are the ones causing the problems."

"But they are not going to get what they want," she continued. "We're too smart."

Read RFT's complete coverage of the killing of Michael Brown and the unrest in Ferguson.