Fewer protesters showed up in Clayton Tuesday morning than in Ferguson the previous day, but their collective voice was just as loud.

The demonstration began outside the Buzz Westfall Justice Center with civil-rights activist Anthony Shahid using a pair of stuffed dogs and a noose around his neck as props to drive home his message.

"Black folks are being slaughtered like dogs," Shahid shouted to the line of police standing guard outside the justice center. "Y'all doggin' us. Y'all supposed to protect and serve, not kill us." 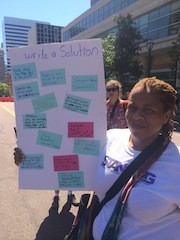 The officers wore their usual uniforms, no riot gear, though they did have gas masks and zip ties hanging from their belts. St. Louis County prosecutor Bob McCulloch, who the protesters hoped to address with their demonstration, never visibly acknowledged the crowd.

After Shahid's speech, the group moved down Carondelet Avenue with curious office workers in downtown Clayton looking on from the sidewalk. The protesters soon reached the St. Louis County Police Department on South Central Avenue and then circled back to the Justice Center. As they marched, they sang out the what's become a common refrain since the police killing of eighteen-year-old Michael Brown in Ferguson: "No justice, no peace!" and "Hands up, don't shoot!"

Volunteers for Pink House, a project of the non-profit Rebuild Foundation, along with volunteers for the Organization for Black Struggle, passed out poster board and markers to those remaining. 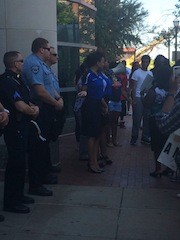 "Given what's happened the past two nights, we thought a lot of people are being told what not to do," said Gina Martinez, an organizer for Pink House. "So we're telling people to write down solutions, and we're going to create a large scale solutions wall, and start to take it around to the different protests."

Eventually, Clayton police told the remaining protesters they had to move off the street but could remain on the sidewalks as long as they wanted. Shortly after, the crowd approached the entrance to the building and the officers standing in front of it for a prayer. One woman offered her hand to an officer, but he didn't take it.

Many protesters acknowledged that anger and frustration is reasonable, even acceptable in this situation, but violence and crime is not.

"We need collaboration now," said Elizabeth Vega, a volunteer with the Organization for Black Struggle. "I'm seeing a lot of angry young people who want to express a voice, but have not been shown the tools to do that in a way that is channeling the anger."

Read RFT's full coverage of the police killing of Michael Brown and the unrest in Ferguson.