Britton Esreal, Teen Shot by Police in Ferguson, Charged with Assault, Pulling a Gun on Cops 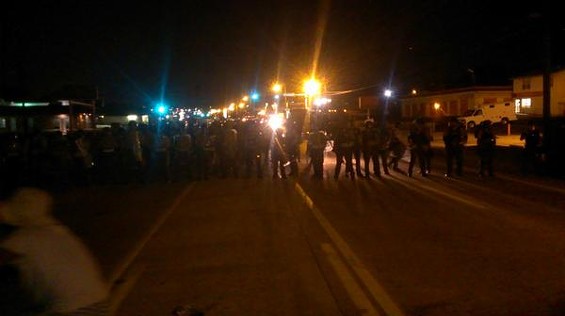 A nineteen-year-old was shot and critically injured by St. Louis County police early Wednesday morning after police say he pulled a gun on officers at the tail end of the third night of tense demonstrations in Ferguson.

Britton Esreal, of the 2000 block of Sun Valley Drive in St. Louis County, is charged with armed criminal action and assault, according to police. He remains in critical condition at the hospital, and he will be held on a $200,000 bond.

"He was certainly in fear of losing his life," Belmar said of the officer. After days of angry and sometimes violent protesters clashing with police, "I thought it was remarkable that [a shooting] hadn't happened earlier," he said.

See also: Two Shot in Separate Incidents During Another Tense Night in Ferguson

According to protocol, the officer is now on administrative leave pending an investigation of the shooting. Belmar said the decision to shoot Esreal seemed "reasonable based on what I know right now" and expects to see the results of the investigation in about a week. Police have not interviewed Esreal, who is still recovering from being shot, and it's unclear if he was part of the protests against police that have rocked Ferguson all week, Belmar said. He was shot only about a mile from the protests.

While violence and looting took hold of Ferguson on Sunday night, protests there on Monday and Tuesday were decidedly less violent, despite a heavily militaristic police presence. By 10 p.m. Tuesday demonstrators seemed to calm down and leave willingly.

"We really felt it was our first quiet night," Belmar says. "We thought perhaps it was beginning to be over."

But that changed as the night turned into early morning. Nearby, a woman was shot in an apparent drive-by just after midnight and suffered a superficial wound to the head, according to Ferguson Police Chief Thomas Jackson.

On Wednesday, August 13, 2014, at approximately 1:00 AM, officers from the St. Louis County Police Department's North County Precinct received a call for four subjects wearing ski masks and armed with shotguns, in the area of Chambers and Sheffingdell. At the same time this call was dispatched, several calls were received for shots fired in the same area. When officers arrived, multiple subjects began running from the scene. One officer encountered a subject who brandished a hand gun, pointing it directly at the officer. Fearing for his safety and the safety of others in the area, the officer fired shots, striking the subject. The subject was transported to a local hospital, where as of this writing, he is listed in critical condition. The subject's handgun was recovered by police at the scene. This is an ongoing active investigation. I have no further details regarding this incident at this time.