Volunteers Clean Up at Ferguson QuikTrip, Get Yelled At for "Helping the White Man" 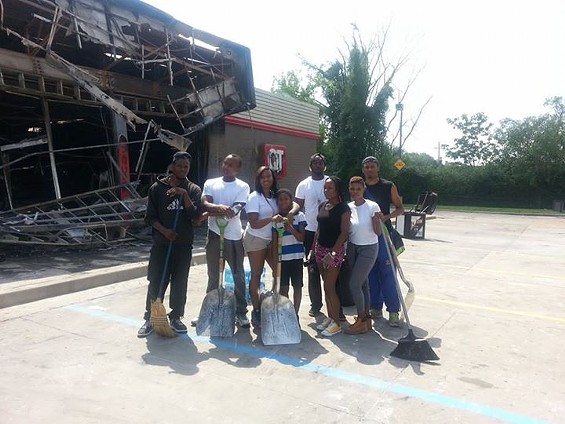 Erica Hampton didn't let her two young children watch the chaos unfold in Ferguson Sunday night. But as the sun rose Monday morning to reveal smoldering ashes and broken glass, she sat down with her ten-year-old son to talk about the destruction wreaked on the town.

"We talked about it, and we decided to go help," Hampton tells Daily RFT. "I'm just really about my community. That's just me."

Hampton's friend lives near the QuikTrip that was looted and burned Sunday night, so that's where she, her son, her four-year-old daughter headed on Monday morning, ready to get to work. Armed with shovels donated from Home Depot, the volunteer cleaning crew cleared the parking lot, which was covered in food wrappers and trash as well as burned debris.

"We couldn't pick up everything, but we got the majority," she says.

See all Riverfront Times coverage of Michael Brown's death and the Ferguson unrest.

The QuikTrip was ground zero for Sunday's violent unrest as looters stole alcohol, food and gas before moving to other nearby stores. On Monday morning, most passersby seemed more interesting in Instagramming a photo of the charred remains or finding a souvenir than in cleaning up.

"People would come by and take pictures and make comments and talk, but no one really, aside from a few people, would say, 'Hey, what can I do to help?'" says Kathryn Banks, who joined the cleanup with her husband after checking on a house they own across the street. "I said, 'We should really go help,' and before I knew it, (Banks' husband) was out of the car and had a broom in his hand. It's not about waiting for the invitation."

Some of the people who walked by criticized the volunteers for working against the efforts to fight for justice for Brown.

"People were yelling at us, saying hurtful things, like we shouldn't be helping the white man," Hampton says. "I'm not here to argue with anybody. This is not how you go about getting justice."

Banks, who took a photo of the volunteers that has gone viral this week, says the cleanup was as somber as it was therapeutic.

"We just all put our heads down and got to work," Banks says. "We'd felt hopeless and helpless watching everything unfold on the news the night before. This was a way we could give back. We felt like there was something we could do."

Not all the people who passed by the cleanup criticized the volunteers. Some joined in, others thanked them for their work.

"That was a community spot," Banks says about QuikTrip. "To see it looted and then go up in flames was just heartbreaking."