Police to Ferguson Bystanders: "You Are in the Middle of a War Zone"

The heavily armed police officer in riot gear was not amused.

"You guys are in the middle of a war zone," he told Daily RFT. We -- along with two other journalists and two Ferguson residents -- had just emerged from a wall of shrubbery 50 feet away from the officer, who stood watch with several other heavily-armed cops in a grassy lot overlooking the beleaguered suburb. We had crept into the restricted area through a hole in a fence and down a muddy path. He ordered us to leave.

"You guys gotta realize that if you guys get your butts in a jam, we can't come get you. You guys are going to have to roll out."

The officer may not have realized the irony of his statement. Last night, scores of Ferguson and north county residents encountered an aggravating "jam" of their own, one caused by police blockades at major intersections and a highway exit. Many found themselves trapped in an aimless search for an unobstructed route home.

See also: - Police in Ferguson Fire Tear Gas on Protesters Standing in Their Own Backyard - Volunteers Clean Up at Ferguson QuikTrip, Get Yelled At for "Helping the White Man"

Police and SWAT forces were out in force in Ferguson last night, and they used armored vehicles, rubber bullets and tear gas to clear groups of protesters and pedestrians from roads, parking lots and, occasionally, residents' own backyards. 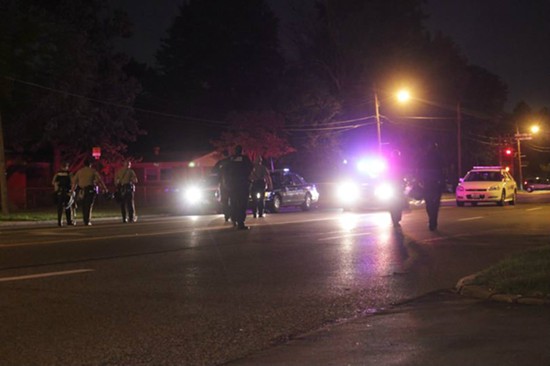 But it wasn't just the heavy weaponry and drifting clouds of gas that made Ferguson, as the not-amused officer put it, look like a "war-zone": Police used flares and vehicles to block the Interstate 70 exit to Lucas Hunt Road, cutting off the easiest southern access to Ferguson.

A phalanx of police vehicles also blocked the intersection of Ferguson and Florissant Avenues. Officers turned back all motorized and pedestrian traffic with blinding hi-beams and shouted orders, but that included residents of nearby apartments.

"Why the fuck do they got our apartment complex blocked off?" one woman shouted as she pulled a hard U-turn and sped back the way she came. There are no other street routes into the complex.

Another major area of police attention last night was the stretch West Florissant Avenue south of Chambers Road. Around 10 p.m., police responded to a group of protesters holding signs and chanting by pushing north on the street with an armored personnel carrier. Officers ran alongside carrying tear gas launchers. A few of the protesters threw rocks at the police before retreating.

After clearing the street, police set up another blockade near the intersection of Nesbit Drive. Only residents with an ID showing an address in southern Ferguson were allowed to pass, but not all drivers have their current address listed on their license. Daily RFT watched as police turned away a woman who said she lived on the other side of the checkpoint because her licence didn't show the right address. Officers manning the checkpoint refused to let anyone (including the media) pass.

Many of the Ferguson's suburban streets curve into cul-de-sacs, and no instruction was given to drivers as what routes were still open. We're trying to confirm which (if any) of these blockades are still up, or if more will be set up tonight. We'll update this story when we know more.

For background on the chaos in Ferguson and the slaying of 18-year-old Michael Brown, check out RFT's previous coverage.

Update 3:30 p.m..: St. Louis County Police Department spokesman Brian Schellman tells Daily RFT that all the roadblocks in Ferguson have been removed. Still, it's possible that police will target other streets, exits and intersections depending how the situation plays out tonight.

"We put [roadblocks] up because of the intelligence that's gathered," says Schellman. "If that happens tonight we'll try to get those locations out to the media."