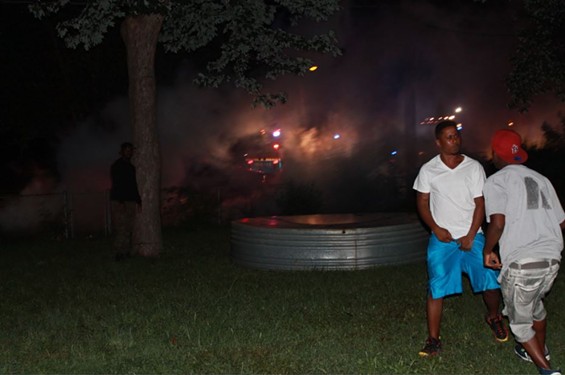 Last night police in riot gear marched down West Florissant Avenue, ordering people to leave the area and firing tear gas onto the streets. Police even fired tear gas into the backyard of a home where several people held their "hands up" in what's become a symbol of protest over the shooting of Michael Brown.

The incident occurred after police had already evacuated nearly everybody on West Florissant Avenue. Between tear gas firings, a police officer bellowed "go home" into a loudspeaker. It took about an hour, but nearly everybody within vicinity of the police left the streets.

Yet a group of four male protesters remained defiant on West Florissant, screaming profanities at the police and putting their hands in the air. The police responded with threats of tear gas.

"Turn around and leave or we will deploy gas," shouted a police officer through a loudspeaker. Residents in their backyards pleaded for the men to get out of the street. After a few minutes of prodding, they did so. But the police still decided to advance.

Standing in his backyard along with a few friends and family was 24-year-old Rich West. And after seeing the police deploy tear gas as they marched down the empty street, West and his friends felt like protesting.

"You go home! You go home!" they chanted. As the police come closer, they all put their hands up.

Once again, the police officer with the megaphone ordered the protesters to go home.

"We're in our yard!" they responded.

At one point West walked to his fence with his hands high up in the air.

"This my shit!" West screamed irately after narrowly avoiding the gas canister. Eventually a friend grabbed him and pulled him back to calm him down.

"This is my backyard! This is my shit!" West continued screaming into the camera. He turned to the police: "Y'all go the fuck home!"

"This is our home. This is our residence," West's brother added. "Why do you think people say 'fuck the police?' Because of that shit."

Flora Busby, West's mother, a soft-spoken woman in her 60s, came into the backyard to see if her sons were alright.

"We in our backyard!" she said. "Why you gotta shoot us?"

Again West shouted at the police. And again they fired another gas canister into the yard -- this one nearly hitting his house.

"It's pure ignorance," West responded after catching his breath. "I pay property taxes here. I should be able to be in my backyard any time."

He said that regular harassment by the Ferguson police department, often in the form of traffic stops, has been occurring ever since he was sixteen years old.

She continued: "I'm angry about that. They shouldn't be doing that. And they didn't need to kill the poor little boy. "