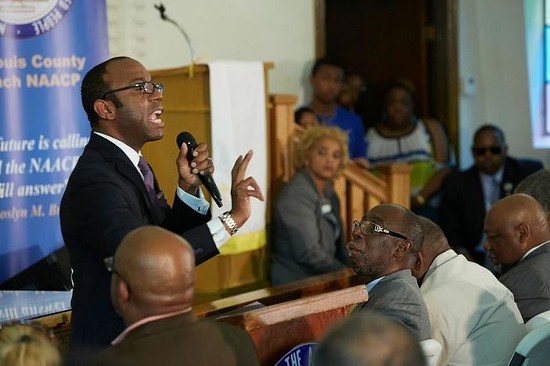 The Murchison Tabernacle Christian Methodist Episcopal Church in Normandy was built to sit 600, and it overflowed yesterday evening during an NAACP-led press conference that seemed to alternate between righteous hope and fever-pitch anger.

"We're talking about somebody's son, we're talking about the sons of our community," said NAACP President Cornell Brooks, who spoke at length on the virtues of non-violent justice while police and protesters continued to clash in Ferguson, where 18-year-old Michael Brown was shot and killed on Saturday.

"We want no more and we want certainly want no less than the truth, unfiltered, un-manufactured," spoke Brooks, referring to the disputed circumstances surrounding the unarmed teenager's death. "We want the truth for his family, for this young man and for this community. We deserve that."

See also: - Peaceful Protest for Mike Brown Before Riot Police and Looting Takes Over - Police in Ferguson Fire Tear Gas on Protesters Standing In Their Own Backyard

But beneath Brooks' call for truth lay the mounting tension of the past three days.

Following Brown's death, peaceful protests in Ferguson exploded into mayhem -- literally, in the case of a QuikTrip gas station that's now a burned-out husk on West Florissant Avenue. More than a dozen area stores have been vandalized or looted since Sunday. At times, police presence in Ferguson has verged on martial law.

During his speech, Brooks attempted to walk the line between the frustration of Ferguson's African American community -- about 60 percent of the population -- and the widespread chaos and looting on the streets.

"Now I wish I could say to you...that you should not be angry. I can't say that," said Brooks. "My dear brothers and sisters, let us be clear: To sneak around under the cover of darkness, to loot, to steal, to burn down your own neighborhood, this does not require courage. Courage is required when you stand up for justice."

The high note of Brooks' speech came as he issued a plea to those youth plundering on the streets of Ferguson. 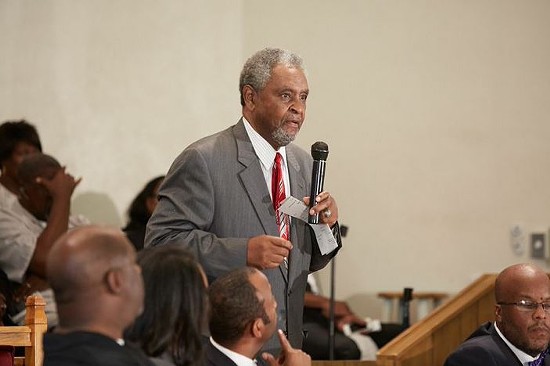 But over the course of the two-hour press conference, Brooks' message of unyielding hope became increasingly undercut by an audience clearly anxious over the protests and the future of their own communities. News of the lock-down at the Galleria Mall had broken, and the prospect of another terrible night of looting and police retaliation clearly affected those gathered in the church.

Berkeley Mayor Theodore Hoskins gave voice to that unease, declaring, "You don't forgive this. Because if you forgive this, you are next."

"We're going to let the preachers get us to heaven," he continued, drawing murmurs of approval from the crowd. "I can understand turning the cheek and all that. But this is 2014. All we want is justice. We don't want to talk about nothing else!"