St. Louisan Gina Sheridan Gets a Book Deal for Her Librarian Tell-All 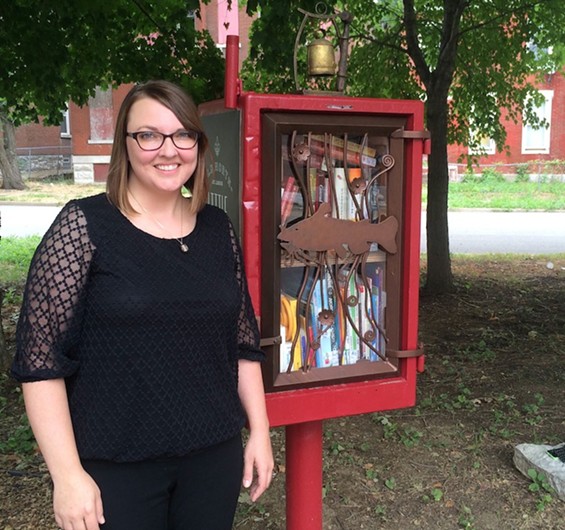 Gina Sheridan did not expect that a woman who drinks chocolate milk from a sock would be the inspiration for a book. Nor did she think keeping a journal of crazy conversations and goings-on in public libraries would amount to anything but her own amusement. But here we are.

In her recently released book I Work at a Public Library, Sheridan and other librarians around the country share stories that sprawl from horrifying to hilarious to heart warming. The book, released last month, shows librarians as trustworthy gatekeepers of all knowledge, basically as Google personified. They are called on to answer questions about taxes and cars and cats and email and jobs and books and relationships. They're asked to open cans of oysters, create a website and plunge a toilet.

"The Internet is a mile wide and an inch deep," Sheridan says. "It's our job to help people negotiate all that information."

A St. Louis native, Sheridan worked at a library in Fresno, California before moving back to St. Louis where she now works at the Clayton branch of the St. Louis County Library. It was in 2007, while in Fresno that Sheridan met the woman referred to as Cuckoo Carol (name's been changed slightly) in the book. She was rummaging through a dumpster behind the library and is the same woman who drinks chocolate milk from a sock. When Sheridan asked Cuckoo Carol why she was in the dumpster, the woman replied that she was looking for aluminum cans.

"Just call me cuckoo," she said.

From that point on, Sheridan kept a hand-written "patron diary" of all the interesting conversations and observations she had while working at a public library. She transferred the diary into a Tumblr blog, iworkatapubliclibrary.com in 2010, and added a submission button and Twitter and Facebook pages soon after.

Kate McKean, the literary agent who represents the book, happened to stumble onto the Tumbler and says it was Sheridan's strong voice that caught her eye.

"She's good at relating things other people say in an interesting way," McKean says. "(The book) is hilarious, but it's different from other books like it because the last chapter is so heartwarming. It made me cry."

Sheridan earned a master's degree in Library and Information Studies from the University of Alabama, a degree she knew she would pursue from the beginning of her undergraduate career.

"I knew I always wanted to work at a public library," Sheridan says. "I love working with people from different demographics, and libraries are places where everyone is welcome. You don't have to buy coffee. You can just sit and read. Or you don't even have to read. And if you nod off, that's OK. Take a load off."