Another St. Louis Area Bicyclist Says He Was Intentionally Struck by Motorist 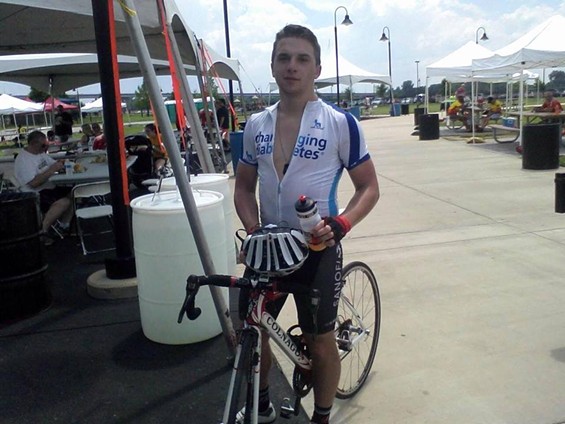 For the second time in a little more than a week, a St. Louis area bicyclist says he was intentionally struck by a motorist.

James Lewallen, 21, of Belleville, says he was riding with a group of cyclists Tuesday evening on Lincoln Farm Road in O'Fallon, Illinois when a man in a white Ford F-150 drove up from behind and yelled at them to get off the road.

Lewallen tells Daily RFT he and his fellow cyclists responded that they had every right to use the roadway, which only seemed to enrage the driver more. The motorist then began swerving his truck "acting like he was going to hit us," Lewallen says.

Things got really weird from there.

Lewallen says the driver grabbed a pole from inside the cab of the truck and began waving it out the window in an apparent attempt to strike one of the cyclists. Lewallen and the cyclists yelled out the truck's license plate number hoping the driver might wise up and stop. He didn't.

The driver then sped up and continued swerving his vehicle and slamming on his brakes as if to get one of the bikers to crash into his rear bumper. Lewallen says he ended up on the right side of the truck near the tailgate when the driver stopped short. Lewallen was about a foot from the curb and put his hand on the truck's tailgate to brace himself. The impact caused his bike to fly out from underneath him. The driver then sped off.

Lewallen was part of a group of about 110 cyclists who left Tuesday around 6 p.m. from Bike Surgeon, a bike shop in Shiloh, Illinois. The riders divided into three groups of about 30 to 40 riders each with Lewallen in the advanced group of faster cyclists when the pickup truck approached. Bikers riding behind Lewallan's group say they were also verbally harassed by the same driver.

Lewallen suffered road rash and bruises over his arms and legs following the crash caused by the truck. His hands would have been scrapped up as well had he not been wearing gloves, which are now "demolished."

Jon Greenstreet, one of the owners of Bike Surgeon, says Lewallen's fork is cracked, and there might be other damage as well. Lewallen bought the bike from a professional race team and estimates it's worth about $8,000.

"It's a very unfortunate incident and makes me scratch my head," Greenstreet says. "Why does it take any time to realize this was a felony offense? If this happened car versus car, that guy's in cuffs going home that night in the back of a cruiser."

And it wasn't like the cyclists were significantly slowing traffic Tuesday evening. Lewallen says his bike computer had him traveling at around 28 mph right before the driver slammed on the brakes to try to hit him. The speed limit on the road is 30 mph.

"This is somebody who does not care about the lives of these cyclists," says Michelle Funkenbush, the attorney who represents Randy Murdick, the cyclist allegedly hit by the mayor of Sunset Hills while riding his bike. Funkenbusch does not officially represent Lewallen but was one of the first to learn of the incident this week and posted a message onto the Facebook page Bikelife STL asking if others cyclists had also heard the news.

We'll update as soon as we learn more. Email the author at mitch.ryals@riverfronttimes.com.