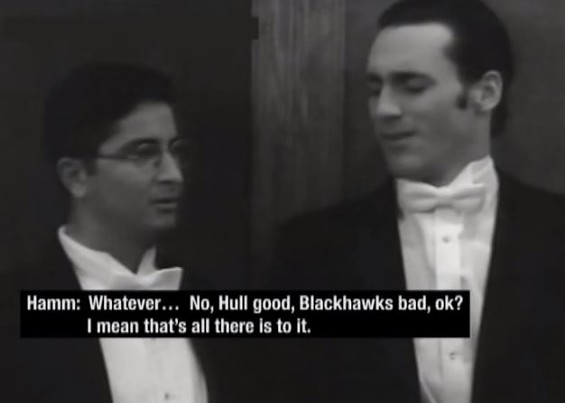 Even as a youngster, Jon Hamm had the casual confidence and gravelly voice that jettisoned him to stardom years later as the lead of AMC's Mad Men.

And here's the proof, courtesy of a 1997 movie clip recently published on YouTube:

Hamm filmed the movie with some friends from John Burroughs High School, where he graduated in 1989. In the clip from the movie "Cheese & Crackers," directed and written by Brian Schnuck and filmed in St. Louis, Hamm and Jason Newman argue over whether St. Louis is a strong enough hockeytown to field a player like Brett Hull -- you know, typical mid-1990s sports bickering.

The best part? When Newman tries to say Hull deserves to play in a "big city," like Chicago. Hamm calls this nonsense.

See also: Paul Rudd Once Tried to Steal Jon Hamm's Prom Date, So They Faced Off in Trivial Pursuit

Even in a tux, 26-year-old Hamm has none of the gravitas of Don Draper, his Mad Men character; rather he looks like Draper's babyfaced cousin. Hamm tells British GQ this month that he had to grow into his acting career:

Flick through the TV guide in the Nineties - I auditioned for every one of those shows. It wasn't just my looks. My energy wasn't right. You know, [affects hyperactive teen voice] 'Hey guys! I think there's been a murder! And have you seen there's a dance?' It wasn't me. I had to grow into being hireable. People said to me, just wait until you're 40. I was like, 40?

Those people were right. Hamm is now 43 years old and super famous.