The St. Louis Cardinals Is One of America's Most Hated Sports Teams: Survey 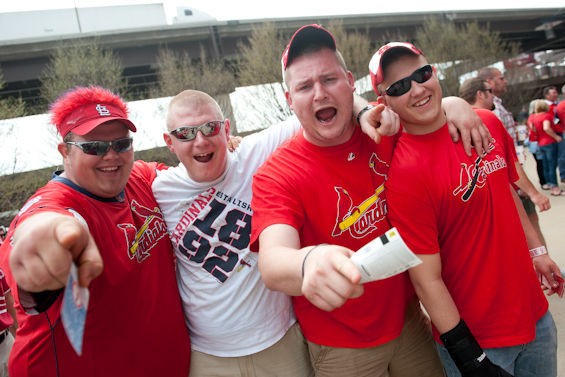 A survey released on Reddit shows seven states hate the St. Louis Cardinals more than any other team. And by "hate," we really mean, "are jealous of."

The only team more hated than the Redbirds? The New York Yankees.

Reddit user scolbert08 surveyed baseball fans all over the world, and the results are pretty entertaining, if predictable.

Wyoming, Kansas, Iowa, Illinois, Wisconsin, Indiana and Kentucky all named the Cardinals as their most-hated team, according to the survey. More than half of the states named the Yankees as their most hated team.

In Missouri, participants voted the Boston Red Sox, who have beaten the Cardinals in the World Series twice in the last ten years, as the most-hated team.

Here at Daily RFT, we expected to see more hatred for the Chicago Cubs, but apparently they're so bad that only people in Arkansas (who are mostly Cards fans anyway) seem to give a second thought about the Cubs. As Reddit user Ehrfurcht put it, "Cardinals fans don't hate the Cubs, we think they're cute for trying."

The survey also took data from baseball fans in Canada and around the world. The Yankees are universally hated on every continent except Australia, which hates the LA Dodgers.

Canadians also predictably named the Yankees as the center of their baseball hatred, though we're still not sure why the Northwest Territories seem to hate the San Diego Padres so much.