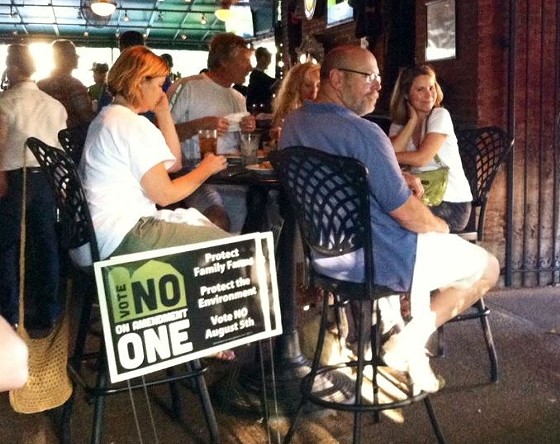 Police in Springfield arrested a Right to Farm protester at the Ozark Empire Fair after fair security claimed she was causing a disturbance. But opponents of the controversial farm bill say the arrest was an egregious violation of one's freedom of speech.

Last week, Laura Umpenour was at the fair and handing out literature that explained her position against Amendment 1 at a booth operated by Len Pense, a local farmer who also opposes the ballot measure known as "Right to Farm," reports the Springfield News-Leader. Pense also put up prominent signs telling voters to vote no on the amendment.

Umpenour tells the News-Leader that while she distributed leaflets, some fairgoers had harassed her. But when she asked security for help, the guards told her she could no longer talk to people about the farm bill and instructed Pense to take down his signs.

The situation slowly escalated over the next few days. When Umpenour returned to the fair the next day to have lunch, she says guards harassed her, warning her that there were cameras in the vicinity, even though she wasn't doing anything. Angry, she went to a TV news crew on the fairgrounds to talk about the harassment.

During the interview security guards told Umpenour that if she came back she would be considered a trespasser. She did return -- and when security guards removed her from the fairgrounds, Springfield police were waiting at the exit to take her into custody.

She was booked for trespassing on Friday and spent several hours in jail before being released.

The Ozark Empire Fair operates on city property, according to the News-Leader. But the fair's operator is a tax-exempt, private nonprofit organization, so the ability to restrict one's protesting activities is unclear.

But opponents of the bill say it's very clear.

"It really is sad that upholding of the First Amendment right to freedom of speech is being squashed by those sworn to uphold the U.S. Constitution," says a commenter on the "March Against Monsanto" Facebook group.

"So much for the freedom of speech! Wow!" adds another.

The Right to Farm vote will be held on Tuesday. Supporters of the bill say it will help Missouri farmers be protected from out-of-state interests that affect farming practices. But opponents insist the only ones being protected are large, corporate farms and that smaller farms will be negatively impacted.

Almost everybody seems to agree that the bill's language is confusing and nobody really knows exactly what the bill does.