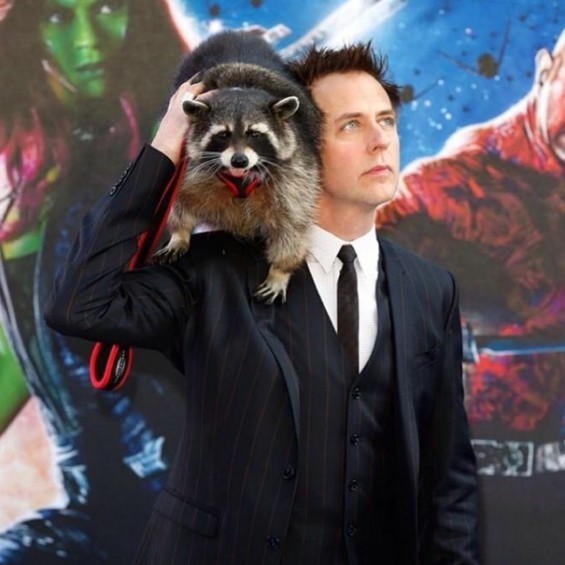 Guardians of the Galaxy, the latest installment in the Marvel Cinematic Universe, begins its wide release Friday, August 1, and expectations are high. Why wouldn't they be? Critics and fans who attended previews for the film have been calling it Marvel's best work and one of the greatest superhero movies ever.

And of course, it's a St. Louis guy behind the whole darn thing.

James Gunn, originally from Manchester, has been known for years as a master at combining horror with comedy, thanks to cutting his teeth at Z-film powerhouse Troma Entertainment and later writing the screenplay for the Dawn of the Dead remake and directing nerd hero Nathan Fillion in Slither. But directing and co-writing Marvel's Guardians of the Galaxy has brought on more attention and acclaim than any other project this Missouri boy has tackled yet.

See also: - Superheroes bump superegos in Joss Whedon's all-star Avengers. Things go boom. (2012 review) - Slugfest: Slither is silly and gross, but it might worm its way into your heart. (2006 review)

Many casual comic-book fans aren't that familiar with Guardians of the Galaxy, which pulls together a group of unlikely misfits -- including a foul-mouthed raccoon and, well, a tree -- to save worlds from annihilation by a power-hungry warlord. (Yes, it's very different from The Avengers.) Take a peek at the trailer:

But Gunn's adaptation of the source material has been winning people over -- enough to nab the writer/director job again for the film's sequel. As he did for many of his other movies, Gunn surrounded himself with talented friends to bring Guardians of the Galaxy to the screen, including his brother Sean Gunn (a frequent collaborator with James and who was best known as Kirk on Gilmore Girls), Michael Rooker (Merle of The Walking Dead), Troma co-founder Lloyd Kaufman and, of course, Fillion, who teased his Guardians cameo during Wizard World St. Louis back in April, just after helping two lovebirds get engaged.

By this point, most of Gunn's fans are familiar with the director's affinity for casting his friends and know that he attended Saint Louis University High School and Saint Louis University. But there may be a few more nuggets that even Gunn's most ardent admirers aren't aware of, so below, check out five weird things we dug up about one of St. Louis' most famous movie nerds.

Tired of writing so many happy posts on his blog in 2006 (his sarcasm, not ours), Gunn decided to unleash his own dark side of the Force for the world to see. He meticulously composed a list of "100 Things I Fucking Hate," which, as titled, was all about things that made Gunn barf. Well, maybe not barf, because that's a term the list shows that he hates. Other things Gunn was not fond of in 2006: touching poop, pregnant strippers, swollen glands, The Phantom Menace and these unfortunate bits about his personal history in St. Louis:

11) The fact that we all told our parents that Russell J. Obmann was doing this shit, but they thought we were being silly and making up stories because he was a dick even outside of being a child molestor.

2. He had a superhero raccoon before Guardians of the Galaxy.

You think Rocket is Gunn's first foray into fur? Guess again. Back in 2008 Gunn was part of a series on Xbox Live called Horror Directors Do Comedy, wherein visionary kings of blood -- including with Saw's James Wan, Hatchet's Adam Green and others -- served up hilarious one-offs. One of Gunn's projects was Sparky & Mikaela, which paired a hot girl with a rodent to fight crime. Gunn's thoughts:

I know what you're thinking. Really, James? Another sexy teen superheroine/puppet raccoon crime-fighting team in a world where raccoons have persecuted human beings for hundreds of years? What can I say? Sometimes you just have to follow the trends to make a buck.

In the 1999 Buffy the Vampire Slayer spinoff Angel, the title character was a vampire with a soul who had a motto of "We help the helpless." Naturally, Angel had a bunch of weird comrades who assisted him with his mission, including a character named Charles Gunn, a streetwise, demon-killing kid who eventually became the head lawyer in an evil law firm (really!). The Gunn character was named after James Gunn, who is friends with Buffy and Angel creator and fellow Marvel Cinematic Universe mastermind Joss Whedon.

When you're an inspired, inventive person like Gunn, it's hard to stick to just one creative field, so, like many twentysomethings, Gunn started a band in 1989 while he still lived in St. Louis. Calling themselves the Icons, the group played original compositions of alt-rock, gothic rock and funk and performed regionally, achieving some success with the 1994 album Mom, We Like It Here on Earth. The group called it quits in the mid-'90s, and Icons vocalist Gunn eventually became the successful screenwriter, director and producer we know today. Check out the tunes on the band's old MySpace page.

5. Gunn is fascinated by his parents' house in St. Louis.

During one of Gunn's visits back to the Gateway City, he became obsessed with documenting the horrifying decorative touches his parents have displayed over the years, such as bedrooms with mega-patterned wallpaper made from fabric:

You know, the usual. But it was Gunn's museum-quality titles that captured the pieces' essences so well. We're particularly fond of an ornately framed tranquil scene of two friends beneath a tree with their pet ewe, which Gunn renamed "I'm Going to Stuff That Lamb up Your Ass, Whore."