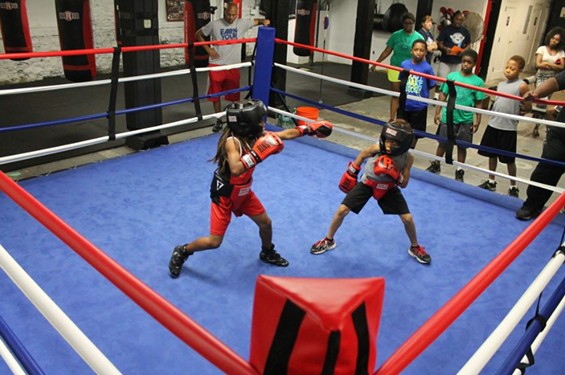 It's almost 6 p.m. at a south-city boxing gym and young folks -- boys and girls ranging in ages from eight to seventeen -- are warming up by throwing shadow punches, practicing their footwork, or catching their breath from a run. In a few moments, two youngsters will lace up some gloves and enter the ring for a friendly spar to practice the skills they learned from their coaches.

Marcus Luther and DeMarcus Murphy, both eight years old, strap on their head gear and get into their corners. One of their coaches, a burly, no-nonsense man, holds a stopwatch. "Go!" he yells, and the two young fighters move toward each other with a boxer's swagger well beyond their age, each maintaining a well-structured stance, ready to strike.

Murphy throws a punch, causing his dreadlocks to fly back. Luther ducks and returns a swing that barely misses his opponent. They back up, do it again, this time connecting more than the last, and again.

All City Boxing from Voice Media Group on Vimeo.

"Corner!" the coach grunts, and the boys, who had just been fighting like men, take a breather.

This is St. Louis All City Boxing, a nonprofit boxing gym where kids and young adults can get an education in the sweet science for no cost. And in addition to learning how to spar, members can learn how to eat more healthfully on a plant-based, vegan diet. It's all part of an athletic and nutrition program that founders Ami and Bill Mackey hope to grow in the coming months.

"When we drove through here for the first time last year, we thought this is a place where we could do our dream," Ami, who moved here with her husband last year from St. Paul, Minnesota, tells Daily RFT.

"There are lots of boxing programs across the country and, though they might do a good job about boxing, they don't necessarily go the extra distance to find out what the kids are doing before they get to the gym and after they go to the gym. So we knew we wanted to put together a program that was more like family and that provided them with the stability they need."

A vegan boxing gym might sound a bit trendy to some, but the Mackeys know what they're talking about. Both work with members of Team USA's boxing team -- Bill as a boxing coach and Ami as a plant-based nutritional consultant. Their clients include eight-time national champion and current national team captain Cam F. Awesome.

Click on the next page for more about All-City Boxing...

Kansas City-based Awesome (his legal name after recently changing it from "Lenroy Thompson") converted to a vegan diet after meeting the Mackeys nearly three years ago. The 23-year-old credits the move with helping him bring down his weight, build muscle and get back into top fighting shape after a few personal slip-ups caused him to lose a spot before the previous summer games.

Back on his game, Awesome is a favorite for Team USA's 2016 boxing roster. So dedicated to the vegan diet is Awesome, his Twitter handle is @plantbasedboxer, and Ami says he prepares vegan food for himself when he goes on the road.

Standing in her gym amid young boxers energetically practicing jabs and right hooks, Ami explains that what worked for a top-flight boxer like Awesome could work for kids in St. Louis -- but that doesn't mean she's forcing kids to dine on tofu.

"When you perform at an elite level, eating Big Macs and things like that might work for you for a time, but if you want to make it to the Olympics in 2016 in Rio, you have to really make sure that you have the edge on your opponent in every way possible," Ami says.

Rather, it's a way to get a lot of nutrition out of a few dollars.

"That's what we want to bring to St. Louis All City Boxing: a nutrition program that not only teaches kids how to eat better and make better choices, but also teaches them how to seek out good food in the food deserts that we have in the city and also teach them how to eat really well on the cheap."

For Ami, doing that involves teaching kids about what to eat with printed handouts with nutritional information, having kids and their parents over for vegan dinners, and eventually, once All-City Boxing gets its official 501 (c)3 status, full dinners every weeknight for every member.

But it won't stop there, Ami explains.

"We put everything together in hopes that at some juncture along the way, we will have a full, comprehensive program that will start at about three in the afternoon and include tutoring, mentoring, GED classes and help with job applications."

Until the program is fully funded and operating at a full scale, the kids at All City Boxing are enthusiastic about what's on offer right now: a place they can come to to exercise, hang out, and learn a few things.

Kids like seventeen-year-old Darren Cunningham, fresh off a third-place finish at the national Golden Gloves tournament, tout the program as a place where youth can learn about discipline, nutrition and focus.

"It's not just about boxing," says Cunningham, who's been practicing the sport for eight years. "You learn discipline, how to eat well and focus at all times. You'll be ready for anything, whether it's boxing, learning, school, everything."

Within the next year, St. Louis All City Boxing hopes to grow from a youth boxing gym with a vegan twist to a comprehensive after-school program combining athletics and nutrition with education. They also plan to make tournaments a regular routine for their boxers, and there's currently a group of kids from All City Boxing attending the Ringside World Championships in Independence.

It's an ambitious project, but one that the Mackeys see coming to fruition soon.

"St. Louis is a place with a great vibe and a tremendous volunteer attitude," Ami says of her adopted city. "People are really working to remake this city, and that's a reason we think this can work."