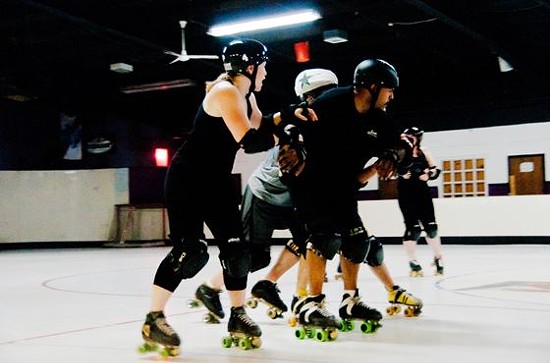 It's a good time to be a dude on roller skates in St. Louis -- especially if you're the kind of dude that likes to hit people.

For the members of The St. Louis GateKeepers, the city's top male roller derby team, these past five months have gone by in a blur of lopsided victories. They're ranked third in the Men's Roller Derby Association, just behind The New York Shock Exchange, but this weekend could change that. The two rivals will be going head-to-head in Las Vegas on Saturday.

"There's very few moments in life where you feel like you're a part of something special, that you know that you're in it," says GateKeepers coach Scott Meyer (a.k.a "Magnum P.I.M.P"), who wrangled a practice Wednesday night with the players still in town. About half the team had already arrived in Vegas for RollerCon, a worldwide derby convention that hosts tournaments and attracts thousands of skaters.

"It's fun as hell," says Meyer, a bearded 33-year-old from Ladue who co-founded the GateKeepers in 2009.

The GateKeepers invited Daily RFT to attend the Wednesday practice before the big Vegas convention, so we drove out to the St. Louis Skatium in south city to get our derby on. A handful of members from the Arch City Rival Roller Girls rounded out the practice.

"The girls know what they're getting into when they come to guys practice," says Meyer, waiting as the latecomers finish strapping on their skates and pads. "It's kind of like the big brother rule -- We won't clean each other's clocks, but we also won't hold back when it comes to riding somebody out or getting into position or playing the actual game."

As far as rules go, the actual game of roller derby require players act as equal parts speed skater and NFL offensive lineman: Two teams of five members skate counter-clockwise around circular track. Each team has a "jammer," who is trying to lap the other skaters to score points, and "blockers," who use body position and leverage to bash other team's jammer into submission.

Meyer is something of a jammer-extraordinaire, and not just for the GateKeepers. In March, he co-captained Team U.S.A. to victory over Britain in the first ever Men's Roller Derby World Cup in Birmingham, England. He got his start in the sport in 2006 reffing and then coaching the Arch City Rival Roller Girls.

Beneath the light of the Skadium's central disco ball, Meyer drills a collection of St. Louis' best male and female roller derbyers in the finer points of coordinated blocking. To an outsider, the maneuvers seem to come down to making your skates screech on the rink floor as much as possible.

Though jarring, that's actually a good sound, Meyer explains later. It means the blocks are working.

As for the female players, they may not be going to Vegas this weekend, but they do have playoffs to prepare for.

"We want to do great, and the main goal to win the first game," says K. Seiber, who goes by the nickname "Tupac Shank-Her" during the Arch City Rival Roller Girls' regular season. She started playing about three years ago on a team in Springfield, Missouri, before moving to St. Louis last year.

"When I was in high school I wanted to play contact sports. I begged my mom to let me play football, rugby, kickboxing, but she was like 'No. You can play soccer.' When I found derby, and it was okay for me to hit, I was so pumped. This is for me."

Seiber attributes derby to getting her out of a depressive rut and back into shape. It turns out smacking people onto their asses is a great motivator.

The male players, of course, are also big fans of athletic violence. Many got their first taste playing hockey as kids. Ryan Fagala, a burly, red-bearded stay-at-home dad and artist living in south city, loves the sport for giving him an arena to throw his weight around. "I've that on my side, so usually I can hit people pretty good," he quips.

But it's not just the hitting that makes the sport so endearing. Fagala says he adores the tight-knit community that's grown around the St. Louis derby scene.

"Roller derby is completely formed and run by the players who play it. This is ours, we pay for it, we set up practice times. The camaraderie we've built by ourselves. That's valuable valuable in sports."

As for Meyer, derby isn't the only sport that's brought him top-of-world victories. He was part of two state championship lacrosse teams at De Smet Jesuit High School, and later went to play at the University of Dayton.

"With lacrosse, you'd go and you'd train and you play, and the you go back to your regular life," says Meyer, who hopes to coach the GateKeepers to its first MRDA championship this year. "This is more of a culture, more of a lifestyle. We all show up the bouts, we play each other, we knock the crap out of each other, then we all get beers at the end of the night."

Daily RFT may not know much about the intricacies of blocking strategies, or jamming, or rollerskating in general, but we're pretty sure we know what what good sportsmanship looks like. It looks like sweaty people who drink beer together.

For more info on upcoming games, check out the respective websites for The GateKeepers and Arch City Rival Roller Girls.