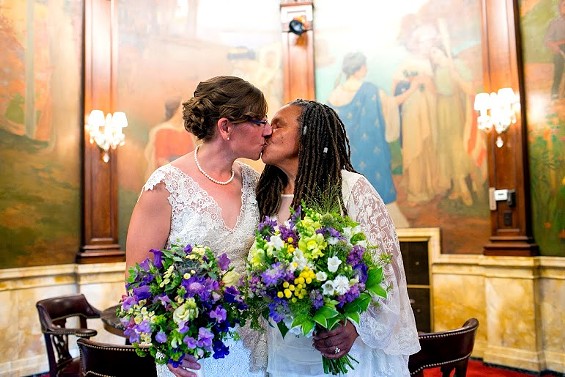 Courts across the country are striking down bans against same-sex marriage so quickly that it's become a running gag in the Midtown offices of PROMO, a leading LBGT advocacy group in Missouri.

While his staff has been saying for months that Missouri's ten-year-old ban on gay marriage is on its last legs, Bockelman made waves around the state when he made his prediction in writing in an email to supporters.

"It is entirely possible -- indeed it's quite probable -- that within the next year, we could see both nondiscrimination and marriage won on behalf of the LGBT community in Missouri," Bockelman writes. "As incredible as that may seem, and after working in this capacity for over seven years now, I couldn't be happier (and even a little bit eager, to be honest) to see that bright light at the end of a very long tunnel."

What makes Bockelman so optimistic? Three cases pending in Missouri courts could allow for a judge to rule that barring some couples from marriage is unconstitutional. Two same-sex couples are suing after Kansas City denied their applications for marriage. Also in Kansas City, the ACLU is suing for the recognition of marriages of eight same-sex couples married in other states.

And here in St. Louis, Attorney General Chris Koster is taking the recorder of deeds to court for signing four same-sex marriage licenses.

Judges in California, Connecticut, Iowa, Massachusetts, New Jersey, New Mexico, Oregon, and Pennsylvania overturned bans on same-sex marriage with their rulings, usually citing that equal protection under the law means everyone has the right to marry. Twelve more states have overturned gay-marriage bans, too, and are waiting for appeals to work their way through the courts.

And if a Missouri judge's ruling resembles recent rulings from other states, the Show-Me State's Constitutional ban on gay marriage could be struck down, Bockelman says.

"What we're seeing is the same thing is playing out across the country," Bockelman says. "Clearly, our side is winning this argument."

Even if local judges drag their feet on making rulings, a U.S. Supreme Court ruling could decide whether there is a constitutional right to same-sex marriage as early as June. The court is expected to hear a case out of Utah after the U.S. Court of Appeals for the Tenth Circuit upheld a ruling from a lower court judge overturning the state's ban on gay marriage.

"The feeling I get from national folks I work with as well as people who watch the courts system is that marriage is decided by the federal courts by next year for sure," Bockelman says. "The atmosphere is very much in our favor."

But the ruling won't come down quick enough for Bockelman, who married his partner in Illinois earlier this month. The men married on the Old Chain of Rocks bridge to be in Illinois, which allows same-sex marriage, and near Missouri, where they live.