July 21, 2014 at 12:03 PM
comment
Efforts to free Jeff Mizanskey, Missouri's only prisoner serving life without parole for marijuana charges, are continuing with an online fundraiser that seeks to raise money for a media blitz that would aim to persuade Governor Jay Nixon to grant clemency.

The goal of the Indiegogo campaign is to raise $21,000 -- a symbolic amount to represent the 21 years that Mizanskey has been imprisoned -- for a series of ads for print, radio, TV, online and billboards. The radio and TV ads will feature Mizanskey himself.

The fundraiser was created by Aaron Malin, a researcher for Show-Me Cannabis (although this is not a project directed by the marijuana reform group). Mizanskey's brother, Mike Mizanskey, is also assisting with the fundraiser. 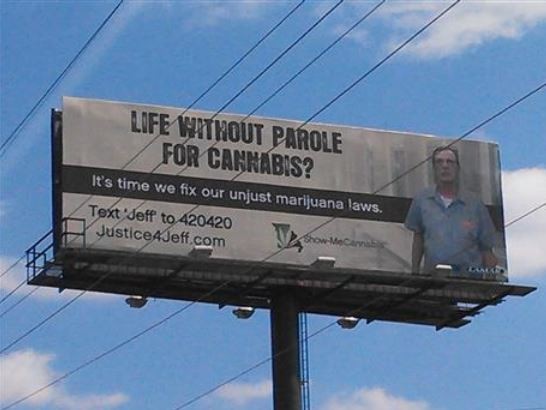 Malin tells Daily RFT that recent efforts by Show-Me Cannabis to publicize Mizanskey's plight and garner public support have been positive, and he wanted to grow on that.

"We've gotten a lot of really good traffic from the billboard on Highway 70 with Jeff on it right now and a lot of positive responses," Malin says. "We think those have been really effective, and we'd like to see more of those across the state."

With more billboards and other advertisements, Malin and Mizanskey's family hope that more people will be persuaded to put pressure on Governor Nixon to grant clemency.

"We kind of agreed that this would be a good time to redouble our efforts and see if we can't create a really overwhelming atmosphere in Missouri where citizens are clearly saying that this guy should not be in prison anymore," Malin says.

Mizanskey himself has been trying to participate in the effort to free him from prison. He recently contacted Daily RFT to put out a statement to the public, asking them to write letters and make phone calls to the governor.

In that statement, Mizanskey says he had just learned that he has a great grandchild on the way, and he'd like to be a part of his or her life.

Malin says that he hopes this message will resonate with the public and the governor. But he also hopes that Nixon will recognize a chance to get on board with what many see as a political sea change on marijuana laws.

"The political reality of the state will change after the November 2014 election and hopefully provide the governor with an additional opportunity to grant clemency," Malin says.

He adds that with Nixon signing into law a limited medical marijuana bill that allows severe epilepsy patients the use of cannabinoid oil, it only makes sense to grant clemency to Mizanskey.

"Now we will have people legally growing marijuana in the state of Missouri while at the same time you will have a person doing life without parole for possessing it," he says.