So you need a ride. You pull out your phone, place the order in an app, watch as the tiny blinking car on the map comes closer to your location, go outside when a text message tells you your ride has arrived and pay with a credit card via the app.

"Even though you might read that something is new technology, it's really not," Debbie Rudawsky, co-owner and chief financial officer of County Cab, tells Daily RFT. "You can have the exact same experience with our app that you can with other apps that are out there. It's not as new as people think it is."

See also: 10 Important Sentences from the Judge's Ruling Against Lyft in St. Louis

A string of app-based ride-sharing businesses have tried to earn their way into the smartphones of St. Louis this year. First came Carmel, which got approval from the Metropolitan Taxicab Commission in February. Then Lyft tried to launch illegally in St. Louis until a judge ordered the company to stop operating here. Uber, perhaps the most well-known of all the rideshares, is still working with city government to alter rules governing rides-for-hire to make way for an app-based model.

"St. Louis is the largest city in the United States without Uber," Kenny Tsai, a general manager for Uber, tells the St. Louis Post-Dispatch.

But while Lyft and Uber wait to cut the red tape, County Cab is booking 12 percent of fares through the St. Louis Taxi app. 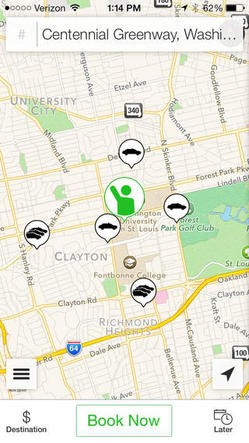 County Cab announced it the 25,000 downloads mark this week, just after a judge granted a preliminary injunction against Lyft. Rudawsky says more than 250 people are downloading the app each week.

"I use the crap out of it," Rudawsky tells Daily RFT.

Just because the taxi company is using an app doesn't mean it's the same as getting a Lyft or Uber. This isn't ridesharing, so your drivers are professionals, not people looking to earn a little extra on the side.

The app also doesn't make a taxi ride cost less. Lyft is still much cheaper, but it also doesn't pay for licensing fees, vehicles or vehicle inspections since drivers provide their own cars.

Of the 20,000 fares County Cab and Yellow Cab dispatch each week, 40 percent of orders come in electronically, through text message, the website, an automated hotline or the app. The rest of the fares come through phone orders.

"People are married to their phones," Rudawsky says. "Whatever you can do through their phone, people enjoy that."