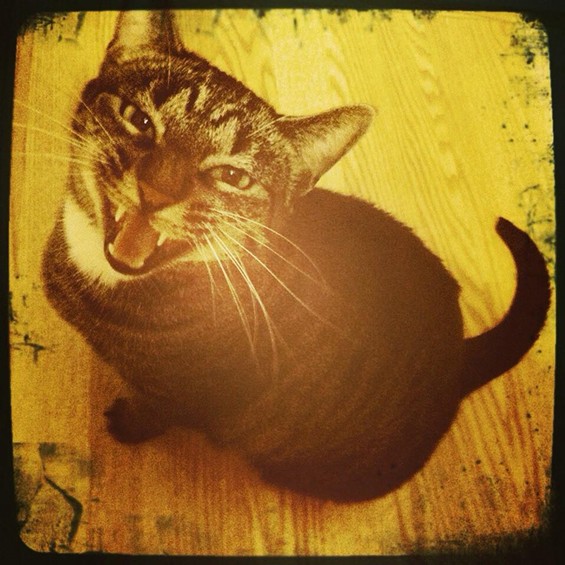 It took Cricket the cat a week to learn to ring a bell for treats.

"I knew Cricket could do this because she was fat and she had a desire to eat at all times," says Sarah Ward, 33, who trained the cat as a surprise Valentine's Day present for her now-ex husband. "If anyone can do this trick, it's Cricket."

But training started slow, especially since Cricket was afraid of the bell. "I think she saw her reflection in it and was scared. When I brought out the food, then she understood, and she was cool," she tells Daily RFT.

"She's kind of a cat idol," says Chris. "She meows on command. I'm pretty sure there's some money in that."

The Wards adopted Cricket nearly ten years ago after a veterinarian office worker found her wandering in the snow.

"When we got her home, we realized she was very vocal," Chris tells Daily RFT. "She will use her paws and bring your hand to her because she wants to be petted."

The short video featuring Cricket will open both nights of the Internet Cat Video Festival.

"I just am really proud of Cricket, and hopefully she will go far," Ward says.