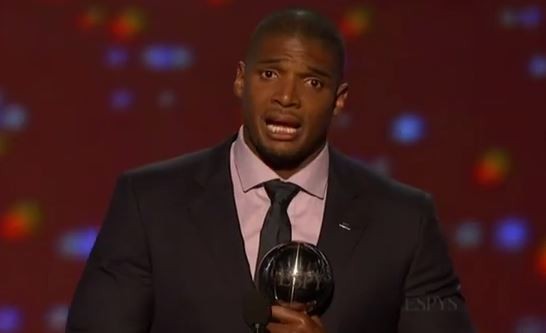 There wasn't a dry eye in the house after Michael Sam walked off the stage at the ESPY Awards in Los Angeles Wednesday night with the 2014 Arthur Ashe Courage Award grasped in his right hand.

"This year I have a lot of experience being part of something a lot bigger than myself. At times I've felt like I've been living in a massive storm, and I know the storm will end," said Sam in his opening remarks, reflecting on the whirlwind journey that took him from a childhood marred by hardship to the NFL, the first openly gay player drafted in the league's history.

"To anyone out there, especially young people feeling like they don't fit in and will never be accepted, please know this," he said, concluding the speech in a voice breaking with emotion -- "great things can happen when you have the courage to be yourself."

Named for tennis legend Arthur Ashe, who spearheaded efforts to confront the AIDS epidemic before dying of the disease himself in 1993, the award's recipients have spanned both the sports community and the wider world, including Nelson Mandela, Billie Jean King and Pat Tillman.

Sam signed a four-year, $2.65 million contract with the Rams last month. He's expected to report to training camp with the other rookies on July 21.