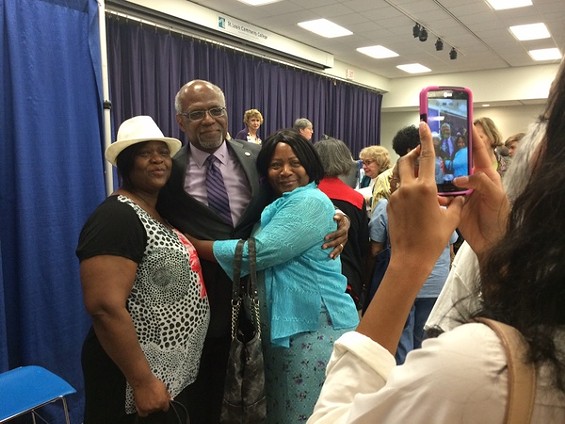 In what is likely to be the only debate in the race for St. Louis County's top spot, four of the candidates for County Executive attacked ten-year incumbent Charlie Dooley for two hours over the problems facing the county, including FBI investigations, mismanaged projects and a shrinking population.

Dooley grimaced through the beating, dismissing the criticisms as "foolishness" and "falsehood."

"There is nobody on this platform that has more experience and knowledge about St. Louis County," Dooley told the crowd of about 200 people. "I'm the only one at this table who truly understands what it takes to be leadership, and sometimes it's not pleasant."

And his opponents? "They don't even know what they don't know," Dooley says.

The League of Women Voters forum Wednesday night was the only debate Dooley and Democratic challenger Steve Stenger could agree on after weeks of sparring over tax returns. With only a few weeks before the August 5 primary, it's unlikely the frontrunners will be able to agree on another time to debate.

Three other challengers also joined the debate: State Representative Rick Stream, a Republican from Kirkwood, stayed even-tempered as he touted his management experience. Green park Alderman Tony Pousosa, also a Republican, continued to fire back at Stenger, the chair of the County Council, for failing to stop the problems for which Stenger blames Dooley. And Constitution Party candidate Joe Passanise blazed his own path as a "citizen candidate," not a politician, determined to bring the public's voice back into politics.

The debate, held at the Florissant Valley campus of St. Louis Community College, turned fiery when the audience submitted questions about the future of north county. Dooley, who stayed energetically optimistic throughout the debate, seemed offended at the idea that the region was struggling economically as businesses leave for nearby St. Charles County.

Stenger emphasized the importance of looking outside the state to recruit new businesses to add jobs to struggling regions like north county.

"The first thing that we need to do is bring economic development to all areas of the county, and that includes north St. Louis county, that includes transforming Jamestown Mall," the once-popular mall that's faced an exodus over the last several years, Stenger says. "I give Jamestown Mall as an example because it has sat as it sits for far too long."

Stenger repeated the litany of woes facing the county as examples of Dooley's mismanagement: FBI investigations into county issues, the lag in dispersing funds to needy children, a lawsuit from trash collectors that could cost the county millions and Health Department official who embezzled millions from the government before committing suicide.

If the county had avoided costly mistakes, Stenger argued, the money could have gone to fix other issues, including lowering taxes or raising public workers wages.

Dooley pointed to the economic recession as the reason he hasn't given pay raises to county workers.

"I don't know where these people have been, but we had the worst recession in the last 60 years," he says. "I'm not going to do something to put this county at risk...but right now, we're turning a corner and moving forward."