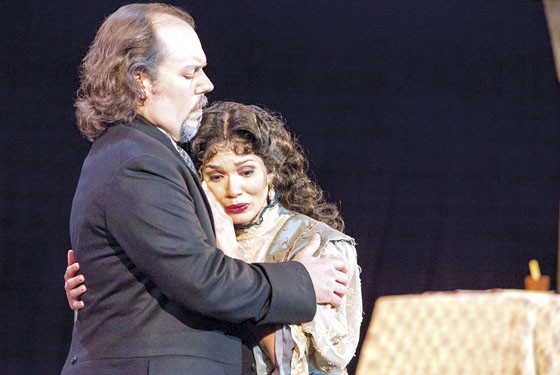 An inspired moment arrives at the beginning of Act Three in Union Avenue Opera's superb rendition of Giuseppe Verdi's La Traviata, when the consumptive courtesan, Violetta, her chance at love lost, lies dying in her bedchamber. As the dappled lights rise to reveal Patrick Huber's set of vaulting Gothic arches, the massive stained glass window above begins to glow.

Burning like the setting sun, it is a visual grace note — the sort of distilled artistry that has given UAO's performances such concentrated force these past two decades. No, the company may not have the war chest of, say, Opera Theatre of St. Louis, but artistic director Scott Schoonover is an operatic alchemist, transforming the restraints of a limited budget into theatrical gold. Now celebrating his company's twentieth anniversary, Schoonover has made a career of rolling the artistic dice, offering a crucial proving ground for bright new voices, some of whom go on to reprise their roles on the world's most vaunted stages.

It is in this tradition that the marvelously gifted soprano Zulimar López-Hernández makes her UAO debut as Violetta, a foundational role in the operatic canon, and one so challenging it has been described as requiring a different soprano for each of the opera's three acts.

Appearing in a bejeweled white gown during the opening party scene, López-Hernández delivers Violetta's effervescent first lines with a determined frivolity. She is only recently recovered from illness, yet knows she is doomed. Still, the tubercular Violetta remains the toast of her Parisian beau monde, and she's determined to spend what little time she has left luxuriating in its sensual pleasures.

Her urgency only gains momentum when an admirer, Alfredo (the tenor Riccardo Iannello, who sounded terrific all night, but was a slightly wooden onstage) declares his love for her. During their sparkling suite of duets that fill much of the first act, López-Hernández didn't shy away from the role's daunting coloratura passages — her lilting voice by turns ethereal, lighthearted and haunting — as Violetta is torn between her life of pleasure and her need to be loved. Particularly outstanding was the contrast between Iannello's intense ardor and López-Hernández's brash coquettishness in "Un di felice, eterea," which was soon matched by her defiant vocal agility that played so beautifully against his grounded tenacity in "Sempre libera." With such strong singers, Schoonover's orchestra was generally quite good, though they at times played softly, with the violins sounding particularly hesitant during the beautiful "Ebben? Che diavol fate?"

López-Hernández's Violetta only gained depth in Act Two, when Alfredo's father, Giorgio Germont (the baritone Robert Garner), convinces her to leave his son because of her checkered past. Garner has a deep, rich voice that wraps around you like a lambskin glove in duets like "Un di, quando le veneri." But all of that earthy depth serves another purpose: it acts as a springboard for López-Hernández's aural acrobatics, as Violetta agrees to leave Alfredo, allowing him to think she no longer loves him. Gone is the frivolity of Act One, and López-Hernández's plangent voice, filled with regret, reaches out for a devastating embrace during their searing song of loss, "Morro! La mia memoria."

Directed by Tim Ocel, the production makes effective use of the set, opening each act with a portentous image of Alfredo at Violetta's grave. Still, there are a few inconsistencies, with actors, as guests, entering through one door but leaving through another. Mark Freiman and Robert Reed sing well in the supporting roles of Baron Douphol and Doctor Grenvile. Similarly, the chorus is populated with strong voices, and its members excel in the matador and gypsy dances of Act Two.

But the action never strays far from Violetta, and by the time the stained glass smolders for the final death scene, López-Hernández is utterly transformed. Joined by Iannello and Garner, they deliver the opera's potent final songs with an overwhelming emotional force — viscerally shattering in Violetta's solo "Addio del passato" and the finale "Se una pudica vergine."

It's that sort of grand operatic moment — often felt at UAO — that's usually reserved for the big stage, and with a Violetta like this, there's little doubt López-Hernández will be there soon enough.