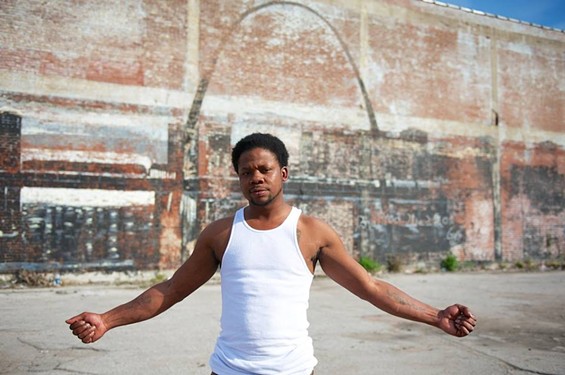 The idea seems simple: Take someone's picture, ask a few questions and post a photo and a quote online. In the hyper-visual, emotionally demanding world of the Facebook news feed, the right portrait-quote combo can strike viral gold.

But there's a secret ingredient -- a breath of inspiration -- the lack of which can doom wannabes and imitators. Call it taste. Call it perspective. Call it heart.

Whatever it is, Humans of St. Louis has it.

Post by Humans of St. Louis.
Each of the fourteen or so portraits and quotes Humans of St. Louis publishes each week equates to hours of backstage prep and thoughtful editing from the site's founders, three students/recent graduates brought together by a love for the original concept, Humans of New York. Lindy Drew, Caroline Fish and Jenn Askew launched their unapologetically referential page on May 5, and less than three months later, they already have more than 13,700 Facebook fans.

"We try to follow the Humans of New York model, but of course, there's room to make it uniquely St. Louis," says Lindy Drew, a Washington University student who takes most of the photos on the St. Louis page. "St. Louis is a phenomenal town to be doing this in. It's a really beautiful thing to watch the whole process from our part be released to the public.

"But there's a lot that goes on behind the scenes."

Post by Humans of St. Louis.
Each week for several hours at a time, Drew takes her camera, and usually her bike, to a new neighborhood looking for people she calls "storytellers."

"I walk up to them and tell them about the project and say, 'We might ask you to get a little vulnerable,'" Drew says. "Those who do are the ones we end up showing on the page a lot."

Drew usually spends anywhere from two and twenty minutes interviewing storytellers. She asks open-ended questions --"What's your happiest moment?" and "What's your biggest struggle?" are popular ones -- and records the answers on her phone.

"There's a big process of trust with these people, with any stranger," Drew says. "With cell phones, everyone is taking photos of themselves. But to have a stranger approach you in the street and say, 'Can I take your portrait?' That doesn't happen."

Post by Humans of St. Louis.
On a good day, she can find as many as ten stories. On a bad day, people have their guards up, cautious of sharing their lives with an inquisitive photographer.

"It's a bit of a heartbreaking moment for me" when people decline to be interviewed, Drew says. "I feel like I've seen something in them, and I want to share that with our viewers."

Then Drew and Fish discuss Drew's images and quotes in a weekly, hourlong phone meeting, honing each story down to an emotionally penetrating and authentic core that resonates with lifelong St. Louisans and transplants alike. About 85 percent of the people she interviews make it onto the Facebook page and Twitter feed.

"We hope that it will connect people in a deeper way," Drew says. "I hope [viewers] feel a little more connected with St. Louis and that they recognize that there's humanity all over the place."

Post by Humans of St. Louis.
Drew may take the most photos for Humans of St. Louis, but she was the last to learn of the popular "Humans of" trend. Fish introduced her to Humans of New York a few months ago, but just two days before they hoped to launch a St. Louis version, Askew beat them to it. Fish reached out to her, and the three decided to team up.

But a lot has changed since its launch. Fish is helping Drew from New York after graduating from Washington University and moving back north. Askew left the team last weekend after a change in her job.

For now, Drew is the only St. Louis member of the Humans of St. Louis team. Eventually, she and Fish will open the project to community collaborators with the talent, interest and time to contribute their own stories.

"We are having a blast doing it, but eventually we are going to need some help, too," Drew says. But adding new photographers can't take away from the aesthetic the team has already built. "The look, I think, is very distinct. We would love to be able to keep that level of perspective."

Post by Humans of St. Louis.
No matter who is taking the photos or asking the questions, Drew says, Humans of St. Louis will always be about the lives of the people of the Lou -- so much so that the team doesn't want to show a photo of themselves despite broadcasting so many intimate portraits daily.