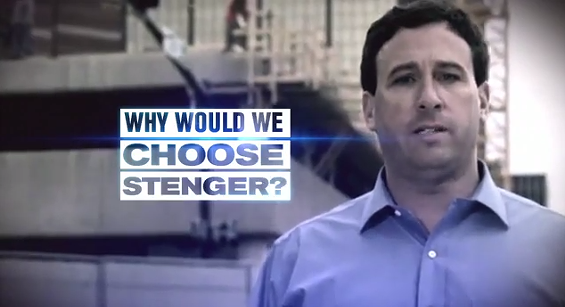 Stenger has released two attack ads of his own accusing Dooley's administration of turning victims of domestic violence away from the county shelter. Now, Dooley's campaign is trying to turn Stenger's words against him, casting his professional defense of an egregious prostitution ring as proof of his personal leanings.

Voters deserve to know the truth about .@SteveStenger & how he defended pimps that trafficked #women in #STL. http://t.co/ILhCepmEb2

"I am astounded that someone who says these things you're going to hear in this video thinks they are qualified to be county executive," Dooley's communications director Linda Goldstein says. "It doesn't matter who he defended. It matters if his defense was ethical."

Dooley did not attend the press conference about the new ad, citing a previous commitment.

The new anti-Stenger ad harkens back fourteen years to the case of the Evans family, twelve male family members convicted of enslaving more than 50 women and girls into sex trafficking. The family ran a trafficking, prostitution and money-laundering ring for nearly twenty years until an investigation launched by the Maryland Heights Police Department unraveled it.

The family's defense attorneys, including Stenger, dismissed the forced prostitution claims with the same victim-blaming logic women's advocates have fought against here for a decade, painting the women and girls as love-struck accomplices who choose to sell their bodies for exciting perks, including cars, clothes and jewelry.

"It's a social unit they chose to live in," Stenger said about the victims of the prostitution ring in a March 2000 St. Louis Post-Dispatch article. "This was a lifestyle they chose."

The truth, eventually revealed in court, was much darker. The women and girl victims -- many of whom were runaways or drug addicts -- worked twelve-hour days and gave all their money to their pimps, who kept the women in line with beatings, death threats and psychological intimidation.

One of the victims, a fifteen-year-old girl named Montrice Bible who ran away to become a prostitute, shot herself in the temple with her pimp's gun after he beat her and used the money she earned to buy houses, cars and clothes.

Bible's story is shocking, but the Dooley campaign seems to hope associating Stenger with clients he was obligated to defend fourteen years ago will sink his chances at the polls.

Stenger called the ad a character assassination and said his comments in court were taken out of context.

"I think this ad rises to the level of defamation," Stenger said, according to St. Louis Public Radio. "I believe Mr. Dooley feels he's losing this election and he's taking a wild swing with this ad."

Even Goldstein, Dooley's communications director and the former mayor of Clayton, admits that lawyers are bound to defend their clients. But his willingness to blame victims to help accused human traffickers went a step too far, she says.

"Stenger's approach is the same thing as saying a woman deserved to be raped because of what she was wearing, and it's about as ridiculous as Todd Akin's 'legitimate rape' comment," she says. "If the best defense he had was the outdated blame the victim defense, then he's either not really a very good lawyer or he just didn't care."

Dooley's campaign didn't rule out releasing more attack ads in the weeks before the August 5 primary election. Both camps have a similar war chest to spend in the final stretch: Dooley reported $479,307 and Stenger reported $477,654 as of June 30, according to St. Louis Public Radio.