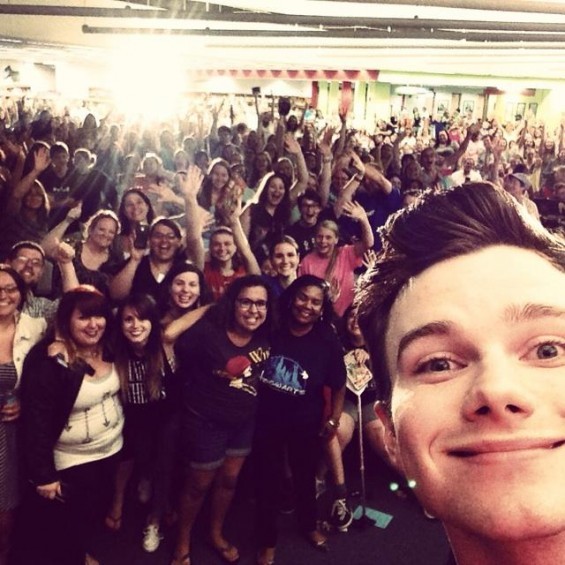 With the gorgeous weather St. Louis has been having, it certainly feels like life is a song here in the Gateway City. Recent visits by Glee cast members simply add the grace note.

St. Louis had its first taste of Glee when Alex Newell served up a saucy headlining set during this year's PrideFest downtown. But Newell, who plays Wade/Unique on the hit FOX television series, was just the beginning of the city's obsession with the show.

On July 15 hundreds of adoring Gleeks filled the St. Louis County Library headquarters, where Chris Colfer signed his new book The Land of Stories: A Grimm Warning and answered questions about his life on Glee. The author and actor, who plays Kurt on the series, name-checked vocalist Adam Lambert and political figure Hillary Clinton before signing books for more than 800 fans.

And that's when all hell broke loose. The good kind of hell. The hell that's full of squeals and hugs and selfies.

Colfer's fans, many of whom are teenagers, were adorably ecstatic to even glimpse their favorite Glee actor in person, let alone meet him. Inspired by Colfer's own selfies taken during his book tour (He tags everything #TLOS3, a nod to the third installment of his The Land of Stories novels), fans lit up Twitter, Facebook and Instagram with selfies of their own, along with plenty of photos of Colfer at the library.

So below, check out our favorite fan reactions to Colfer's visit, but be warned: There are plenty of exclamation points and capital letters ahead!

Love that @chriscolfer snapped a quick selfie with the 800+ fans at the @SLCL tonight! pic.twitter.com/ABnU0pWoWn

Yeah, we have crushes on them, too:

.@chriscolfer you were so sweet. I felt the same as u did when u met Hillary, heart pounding and it's all a blur!! pic.twitter.com/miu6zvkUgw

We see him! Kind of!

Stalker in the making?

So I didn't get a selfie with u @chriscolfer but my niece was ecstatic that u liked her Angry Birds shirt!

Colfer has a nice ass, apparently:

He's beautiful. His voice is like angels. Btw videos & photos do NOT do Chris's booty justice @chriscolfer #TLOS3 pic.twitter.com/bTDZ0K2Vs1

@chriscolfer I JUST MEET U AT THE LIBRARY, AND Y COULDNT I GET A PIC WITH YOU!!! Sorry but ur publicists suck. Bad. Sry not sry

The photo disturbs us, but we can't look away:

@chriscolfer MY MOM GAVE YOU COOKIES TONIGHT PLEASE LOVE ME