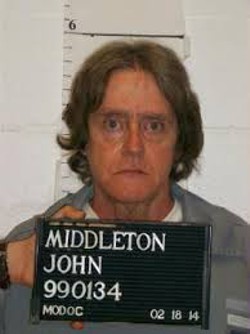 "The affidavits he provided from other inmates and from the counsel who have dealt with him indicate that his mental state has deteriorated over the 17 years he has been incarcerated. The inmates indicate that he frequently talks to people who are not there, and tells stories that could not have had any basis in reality."

John Middleton, an ex-meth dealer and convicted murderer, is facing lethal injection tonight for the 1995 shootings of three people he suspected of being police informants. However, unlike the other six inmates sentenced to die this year, Middleton's final legal appeals aren't focused on Missouri's notoriously secretive execution policies.

Instead, his lawyers have laid out a string of seemingly revelatory evidence gathered in the past six months by former cop turned private investigator. This new evidence, according Middleton's attorney Joseph Perkovich, "destroy[s] the state's theory of the case" and implicates two other meth dealers as the true killers.

"The case, in the end, was very, very circumstantial," says Perkovich, who maintains that Middleton was actually locked up in an Iowa jail the day he supposedly shot Alfred Pinegar in the back and face. "Many of the issues we've uncovered should have been uncovered, and if they had been he would not be facing an execution this week."

June of 1995 was a rough time to be a meth dealer in Harrison County. A dragnet by the Missouri Highway Patrol Drugs Task Force had busted several men, triggering a "cascade of paranoia" among those who remained.

"Everyone was worried that the other guy was going to sell them out," says Perkovich. Compounding the panic was the fact that many dealers, including Middleton, were getting high off their own supply. "That led to certain drug dealers taking matters into the their own hands, with respect to snitches."

Pinegar's corpse was discovered on a gravel road on June 26, and a subsequent analysis of insect growth on the body put the time of death to sometime before sundown on June 23.

Middleton was arrested and charged for the murder shortly afterwards. The arrest was based on the testimony of various meth dealers; one dealer told police that Middleton confided to him about a "hit list" and that Pinegar was on it.

But Robert Hall, the University of Missouri entomologist who had testified to Pinegar's time of death during the 1997 trial, reversed that testimony in February of this year: It turns out that the Missouri Highway Patrol had provided Hall with the wrong date for when the autopsy was conducted -- a fact that threw off Hall's bug-based calculations by a full day.

After reworking his analysis, Hall determined that Pinegar's actual time of death occurred during the afternoon of June 24.

The problem, says Perkovich, is that the prosecutor's trial evidence revolved around the murder occurring on June 23. Even more troubling is the fact that on June 24 -- the revised day of Pinegar's actual death -- Middleton was behind bars 40 miles away, in Decatur County, Iowa, waiting to make bail on an unrelated misdemeanor charge.

It's not just the possibly flubbed autopsy date that clouds Middleton's case. Earlier this year, his attorneys discovered a 1995 police report that described a beating suffered by another Harrison County meth dealer whose buddies suspected him of ratting to the police.

This past February, the unnamed man told a private investigator how two other meth dealers brought him to see the Pinegar's body on June 26. One dealer took credit for the murder and then beat him unconscious with a baseball bat, as a lesson.

They thought I was a snitch and brought me to the body to show me what they they would do to me if I talked about their meth business...By now I could see the body next to the fence was a mess. It was covered in blood. [One of them] said: "There's already been three people killed, you want to be number four?"

It's not clear why prosecutors back in 1995 ignored the police report of the beating, but the incongruity piqued the interest of current Harrison County Sheriff Josh Eckerson, who just last week reopened the case file.

"When people present information to me, I want to take a look it and not just toss it in the trash," says Eckerson, who was elected to his position in 2012. "You're talking about somebody's life who's about to perish for a crime. I wanted to make sure that what they're presenting to me doesn't have some effect on that."

Continue to for the result of Eckerson's investigation into this thorny, paranoia-and-meth fueled killing.

It didn't take long for Eckerson to reach a conclusion: The witness' testimony of the beating he'd received didn't change anything about Middleton's guilt.

Attorney General Chris Koster was also not swayed by the Perkovich's so-called new evidence. In the state's response to the appeal, he calls the newly uncovered witness "not credible after having waited nearly two decades to make his current statement" -- even though the witness had reported details of the incident to police way back 1995.

Koster also disputes that an error was made in determining the time of death, and argues that the the autopsy and insect-collection were conducted on the day the Missouri Highway Patrol recorded, June 26.

"There was no real discrepancy for defense council to notice or fail to notice," Koster writes. "Middleton has manufactured the alleged discrepancy nearly two decades after the events."

It should be noted that Middleton was also convicted of two other murders, also snitch-related, that occurred a week-and-a-half prior to Pinegar's killing. Middleton's cellmate testified that he confessed to shooting Randy "Happy" Hamilton and Stacey Hodge and hiding the bodies. Perkovich considers the testimony to be another fabrication, and notes that the court found it necessary to hold a competency hearing for the cellmate before allowing him to testify at Middleton's trial.

Here's the full text of the ruling to stay Middleton's execution.