People gathered in front of the St. Francis Xavier Catholic Church on Lindell Boulevard Sunday to mourn the nearly 200 Palestinians killed by Israeli military attacks over the past week. But they also came to protest what they claim to be is unfair media coverage and a U.S. government that sends vast amounts of money in military aid to Israel.

The battle between Israel and Hamas has been bloody. But in the past few days, nearly all of that blood has shed from Palestinians. Hamas is guilty of firing hundreds of rockets into Israel, but Israel has been criticized for being too heavy-handed with its attacks in Gaza, one of the most densely populated cities on earth. Those attacks have resulted in 172 deaths, according to Sunday night reports. Most of the dead are civilians, including young children. Israel, meanwhile, has no deaths reported in this latest battle.

And while the violence in Gaza might be a long way from St. Louis, the Palestinian population here, as well as many other supporters, had something to say about it.

Despite intermittent rain, a large crowd showed up to the vigil that was organized by the St. Louis Palestine Solidarity Committee. Several people waved Palestinian flags as cars drove by and honked in support. Many others held strongly-worded signs with messages such as, "Blowing Children to Bloody Bits is Not Self-Defense" and "Stop the Genocide." 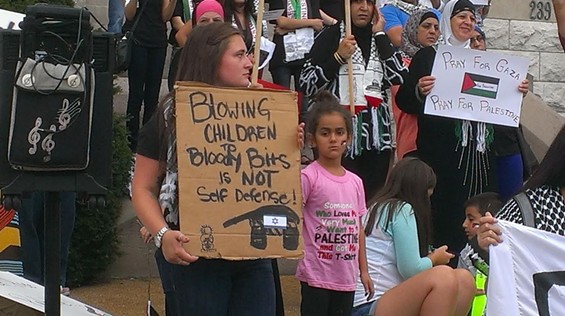 "We're here because $3.1 billion of our U.S. tax dollars -- every year -- goes to militarize the Israeli army that has done done all these things and keep doing it," says Suhad Khatib, an activist with the St. Louis Palestine Solidarity Committee. "They're not stopping and they have the media on their side. So we just want to be in the same space of people to talk about what we know is the truth."

The billions of dollars that Washington sends to Tel Aviv each year was a major concern for many of the protesters, including Nick Badwan, a Palestinian who has lived in St. Louis for 10 years, and his American wife, Jamilla.

"The U.S. only supports Israel," says Nick Badwan. "They send all kinds of money to the military there."

"Stop funding them," adds Jamilla Badwan. "Each thing that they throw at us is funded by our money -- and that's the thing that sucks. There's nothing you can do as an American but protest."

See also: West Bank Story - From Palestine comes an absurdist look at life under the intifada

The Badwans also claim that the media coverage has been unfair and heavily biased towards Israel. One example cited by them, as well as other protesters, was the faux pas committed by ABC's Diane Sawyer, who aired images of Palestinians amidst buildings demolished by the Israeli military, but said they were of Israelis whose homes were destroyed by Hamas.

Sawyer apologized for the error, but protesters say it is just one example of a larger issue.

"You only hear about Israel in the news or media. You only get one side of the story," says Nick Badwan. "There has been 200 people killed in Gaza and Israel only talks about their side. What about the other side?"

Jamilla adds: "If the tables were turned, the coverage would be everywhere. If one [Israeli] kid died, it would be equal to 5,000 of us. But with us, how many people have died -- women, children -- and the coverage is where? It's nowhere."

Many children have died in the Gaza attacks and several protesters brought their children to participate in the demonstration as a show of solidarity.

Haleema Jaraba brought her young daughters and nieces to the protest and one of her kids held a sign that read: "Killing an 11-Month-Old is Not Self-Defense." The Florissant housewife says she has been impacted by images of dead Palestinian children.

"I would hate that if my kids had nothing to do with it and a bomb fell on their house and killed them for nothing," she says. "What does kids have to do with it? They didn't throw a bomb or shoot soldiers or anything. They didn't cause any of this."

The Israeli government says that the deaths of civilians is the fault of Hamas -- if the anti-Israel group did not use civilian homes and mosques, Israeli officials claim, the Israeli military wouldn't need to target those types of places.

RETWEET THIS: Hamas terrorists use houses as command centers. We target them for a reason. #ProtectiveEdge pic.twitter.com/LjiQSYwSg0

At one point during the vigil, the name of each Palestinian who has been killed by Israeli military attacks was somberly read aloud. Khatib says making the list was difficult because it nearly doubled overnight.

"Yesterday when I was preparing the list of people that were killed so that we can read them today, I had 100 people," she says. "Today, they were telling me we have 178 people."

Ghaith Hasan, a 26-year-old biomedical engineer at the Veterans Administration hospital in St. Louis, says he hopes that people look at the situation between Israel and Palestine in a more open-minded way.

"It's really important to get the word out and educate people and show people there's a lot of different viewpoints and different things that most people don't know," he says.

And Janeen Salem, a 24-year-old behavior therapist in St. Charles says that education about the situation could have major impacts. 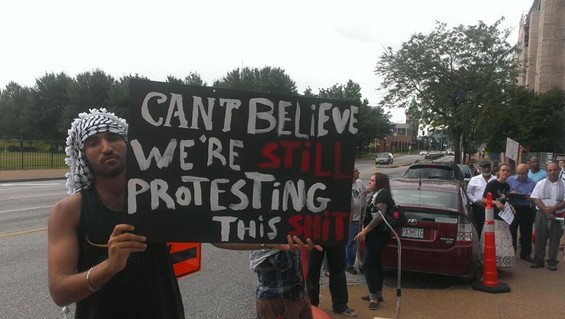 Khatib says that the violence in Gaza has made a deep impact on St. Louis' Palestinian community has been "overwhelmed with sadness." She then describes a very graphic video that has been shared widely on social media that shows a Palestinian man crying over his son, who had just been killed.

"The father is holding his son and begging him to wake up and promising him that he had bought him a new toy -- but half of the kid's head was gone," she says.