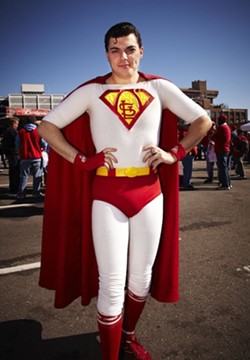 Who will save the day now?

Charlee Soffer, better known as the St. Louis Superman, announced Wednesday that security has banned him from entertaining baseball fans outside Busch Stadium.

Another street performer -- who was demanding gratuity from passers-by -- told security that Soffer and another Busch Stadium staple, Joe the Balloon Man, were also forcing money from people, Soffer says.

UPDATE, 3 p.m.: Great news, Superman. Stadium officials say Soffer, Joe the Balloon Man and any other street performers who follow the ballclub's rules prohibiting soliciting are welcome outside the stadium. A Cardinals spokeswoman says Superman has never caused a safety issue, but when someone told security that Soffer was soliciting, security officers told Soffer he was not allowed to ask for money. End of update.

"There are unfortunately a lot of people in St. Louis, and most are sports fans, that have the wrong perception of what a street performer actually is," Soffer tells Daily RFT. "Until I'm able to give the whole community a public way to properly define my career and help them understand what I really do, I'm afraid more and more people will misjudge and bear witness to a false rumor they very well could believe."

Soffer says he's not ready to talk more about what happened "out of courtesy and privacy" but called the issue a "misunderstanding that Joe and I are sorting out with the park."

"We were 'thrown under the bus' (the security officer's words) by a person we both trusted and cared about," Soffer says on Facebook.

Like kryptonite, the Busch Stadium ban seems to have sapped Soffer of the upbeat enthusiasm he's known for. He still plans to perform this weekend, perhaps downtown or in the Loop, but asked Facebook fans to keep him and Joe the Balloon Man in their prayers and thoughts.

"Not only does this bring pain to me, but also a lot of struggle as I have no idea why this type of thing could even happen," Soffer says on Facebook. "This was a hiatus I never wanted to have to take, and an emotional one at that. I know people realize that this is my livelihood, but it is not about the income. It is so much more than that. This is like having part of my life ripped out of me.