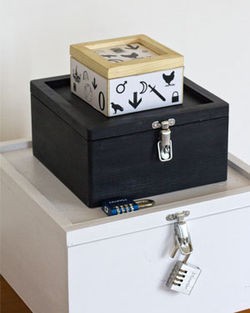 The baffling mental gauntlet is returning for its third run on August 20, and Chezrony, the show's creator and puzzle designer, is banking on new puzzles and a new theme to attract just the right collection of brainiacs. Their challenge: Escape a locked room before the 60-minute timer hits all zeros.

"I tried to remove any randomness from this next room. They're not going to be able to solve it without going through every single puzzle and solving it correctly," says Chezrony, who works as a biomedical engineer at Philips when he's not devising brain-stumping obstacle courses. "Beyond that, I think I made the puzzles a bit easier."

The subject of a Riverfront Times feature story in April, Trapped: A St. Louis Room Escape is a spiritual offshoot of the "Real Escape Games" that took Japan by storm in 2007 and migrated to the U.S. in 2012. Last year, inspired by the team-based ventures and his love for similar point-and-click PC games, Chezrony partnered with a high school English teacher and two Philips coworkers to found Enigma Productions.

"We've got a massive amount of demand," says Chezrony, adding that he receives weekly e-mails from people anxious to pit their intellects against the locked room.

However, unlike the large "Real Escape Game" operations on West Coast, Enigma Productions doesn't have a permanent venue. April's Trapped: Volume 2 was set in a rented office space in the Central West End, and the upcoming show will be in a totally new location. To meet the demand, Chezrony says his master builder, George Koval, will be constructing two identical sets of the puzzles so that two rooms can be run simultaneously.

"Instead of everything being inverse" -- like black-and-white themed puzzles in Trapped: Volume 2 -- "everything is harmonious," explains Jeff Landow, a high school English teacher who specializes in designing the room's word-based riddles.

"Every puzzle is going to fit together into one central puzzle," he gushes. "We also have sound incorporated into the room now. It's really exciting."

Chezrony says he's taking the lessons learned from previous shows to heart. Though he's praying for a real, clean winner to step up, the ultimate goal is to refine Trapped into an hourlong adrenaline rush, regardless if the team wins or not.

"Its not about the win, it's about the experience," he says. "For this room, approximately nine of the ten puzzles can be worked on simultaneously. I want to see what happens if you have access to all the materials at once."

"I'm taking the best things from each show and trying them out in new ways," Chezorny continues. "It's always going to be an experiment, because it's very hard to get the perspective of the people in the room. But that's the reason I love watching every show -- they take it in ways I never would have imagined. I get inspired by them."

Trapped: Volume 3 will run August 20 to 31. For ticket info, visit the Enigma Productions' website. If you're the curious type, Chezrony has publicly posted the solutions to all the puzzles from the previous two volumes, which you can see here.